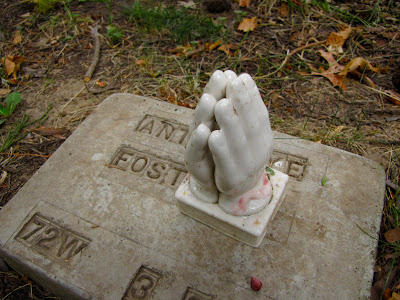 While waiting for someone to burst through the door exclaiming, “Hey, we gotta publish this stuff,”—meaning, of course, my 15,000 cemetery photos—and having run out of near-by cemeteries to add to my list, I’ve begun inventorying the art and epitaphs on the monuments at Lone Fir Cemetery, Portland’s premier pioneer graveyard. To no ones surprise, it’s going to take a while; there’s a lot of good stuff in Lone Fir. It’s one thing to slowly read all the markers, it’s a whole other matter to locate them on the plot map, much less write them up, enter them in the database, match the photos to location & text, etc.

In the process of shooting this new series of marker-specific pictures, the hidden photographer within me can’t resist the occasional “mood” shot, just because it’s there. Here are three from yesterday, August 19. 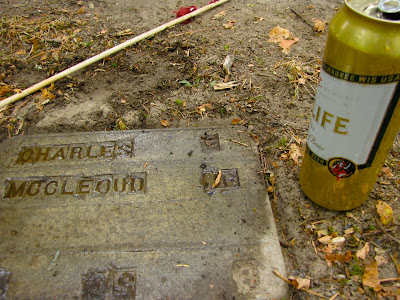 The praying hands and the address book were found objects as I read down the rows, but I was drawn to the Miller Beer can by the actions of another visitor as I went on my rounds. I don’t know that I’ve ever been to Lone Fir when I wasn’t accompanied by a few, if not a bunch, of people, and cars routinely drive down its alleyways; but everything’s always pretty low-key. The most constant activity are the Russian ladies hand-watering their gardens, so it was noticeable when a vintage blue pickup piled high with plastic garbage bags came roaring down the main drag of the cemetery, did a T-turn at the end of the roadway and roared back to park on the edge of the grass. The driver got out leaving someone in the passenger seat and went over to an open spot under the trees. I could see he has something in his hand and he was doing a lot of talking, to whom I had no idea. He bent over and brushed clean whatever he was looking at. He didn’t take too much time; in a bit he headed back to his truck and roared off.

Needless-to-say, as soon as he was gone, I headed that way and took the shot you see here. No, it hadn’t been raining; that’s beer on Mr. McCleoud’s marker. Although, considering it’s Miller, it brings to mind Monty Python’s observation that American beer is like making love in a canoe: it’s fucking close to water. 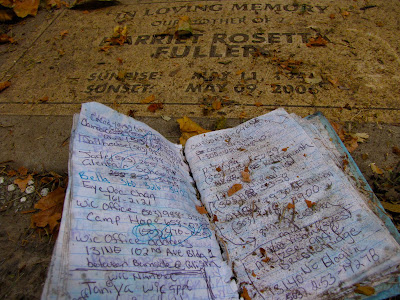 The mood shots are always the best. Great stories.

Oh very nice! You are so much like me LOL! Grief 15,000 i feel your pain and yes the preparation of the photos is a hugely time consuming job...look great once they are up though ay wot! Me personally....i'm hoping flickr never closes down...all my hard work would be nothing!

As an aside...this was one of the most bizarre grave offerings i've seen - personal hygiene to the death!

Keep up the good work..love your posts.

Great blog!!! I hope you can visit my blog at www.roof-detective.blogspot.com and become a follower. I look forward to seeing you there.