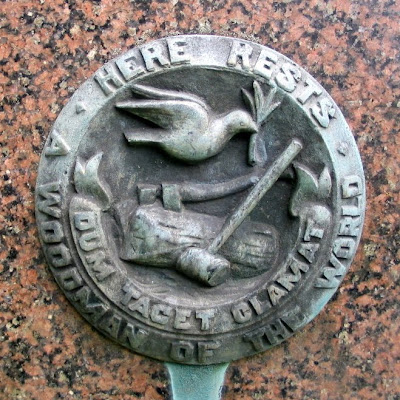 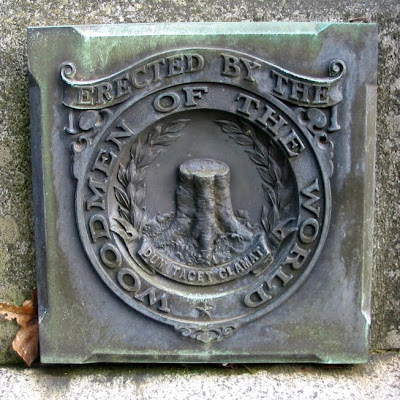 Mountain View Cemetery (Oregon City)
The only serious bunch of cemetery aficionados I’ve run across is the Association of Gravestone Studies, (AGS) out of Greenfield, Massachusetts. If the truth be known, they’re a touch academic, but they’re harmless for all that. They put out an electronic newsletter, a quarterly bulletin, and an annual journal with articles such as “The Tombstones of the English East India Company Cemetery in Macao: A Linguistic Analysis” (Markers XXVI, John P. O’Regan). Given the nature of the beast, their annual meetings are in the East, but their long-time editor, inspiration, and mentor has been a fellow from the Willamette Valley, Richard Meyer, so the West has had at least some presence in the organization. The current Markers editor, June Hobbs, hails from Oklahoma, so the West still maintains a tenuous toehold in the group. I have only been a member for a couple years and have yet to meet another. For me joining was A) a way to support what the group was doing, and B) subscribing to the bulletin and journal. My money has been well spent.

Given the locus and academic composition of of the association, it’s not surprising that its focus is on antiquity and esoterica. It’s not that the modern world doesn’t exist; it’s that is has, for some reason, less draw than the past. Part of that reason, aside from the composition of its membership, is understood in the name of the organization: The Association for Gravestone Studies. It, pointedly, is not an association for the study of cemeteries, even though the study of the one is inseparable from the other. (There doesn’t seem to be an equivalent academic association devoted to cemeteries. If there is and I’ve missed it, please inform me.) It is, necessarily, a question of emphasis. 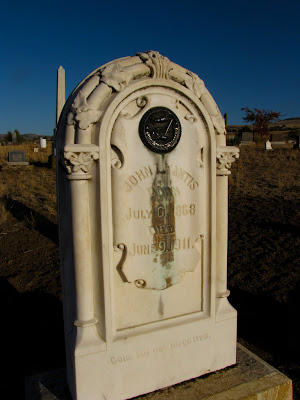 IOOF #110 Cemetery (Fossil, OR)
What that means, practically, is that their publications don’t have the range that I’d wish; nor do they cover, as thoroughly, modern practices and the sociology and geography of cemeteries. Mind you, this is not a fault but a result of their focus of interest. Fair enough. Other people do write about cemeteries, and each issue of Markers ends with “The Year’s Work in Cemetery and Gravestone Studies: An International Biography,” a thorough scouring of the available literature. Still, Markers itself remains, arguably, the best current (American) writing on cemeteries.

You don’t have to take my word for it, nor do you have to join the Association, to see for yourself. All back issues of Markers (2008 and before) are available online at the Internet Archive through the University of Massachusetts’ website.

That’s where I found Annette Stott’s informative article, “The Woodmen of the World Monument Program”, in Markers XX. It is, to date, the only detailed study of WoW monuments I’ve encountered (which certainly doesn’t mean that there aren’t others). Stott examined the files of the Pacific Jurisdiction, which is what the western branch of WoW is known as, in Denver, and pried from them a wealth of interesting information, including copies of the sample pictures send to the plethora of stone carvers who actually executed the works. That plus financial information on the amount, kind, and method of distribution of monetary contributions WoW made towards members’ markers clarifies why virtually no two of them are identical. 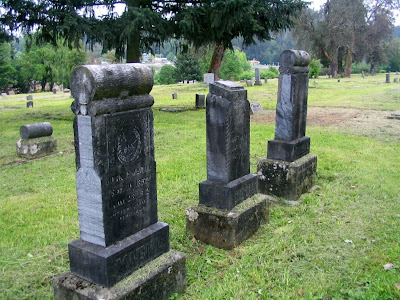 Laurel Grove Cemetery
Stott also brings to the table significant data on the early history and function of the Woodmen of the World (including its outgrowth from the Modern Woodmen of America). In their first iteration they were a much more complete fraternal organization in the Masonic/Odd Fellows tradition, hosting, among other things, annual cemetery clean-ups and unveilings of new monuments, complete with parades and marching bands.

WoW monuments were not without controversy, Stott points out. Some people saw them as blatant advertising, particularly since the WoW symbol was, generally, so prominently displayed on their tombstones; and some cemeteries attempted to ban the symbols outright, with little success. Although, since both the Masons and the Odd Fellows decorate their tombstones with their symbols, not to mention religions with their symbols—every bit as much advertising as the WoW symbol—why the Woodmen should have been singled out is unexamined. Were the Woodmen, for example, the only organization, other than the U.S. military, that contributed towards a member’s marker? 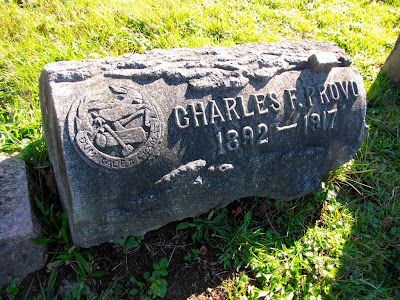 Ilwaco Cemetery
From inception, apparently, two types of tombstones were authorized: the iconic faux stump, or a more formal pedestal surmounted by a cloth-draped urn. I have nearly 400 WoW photos on Flickr and have yet to find a WoW cloth-draped urn, but the collection contains photos of a large diversity of other styles beside faux stumps. It needs to be ordered by type of monument and date. (It’s online; feel free.) Even though I try to be diligent in capturing images of all WoW monuments I encounter, because many of them are not as distinct as the stumps, many, inevitably, get missed. Unfortunately, other than the draped urns, Stott ignores the history of other designs. It’s tempting to ask what old files still exist at WoW offices?

Annette Stott opened the door to a prominent room in our cemeteries. She’s showed us where some of the treasures are hidden. Someone should come by and turn on a couple lights. There’s more there; I know there is. 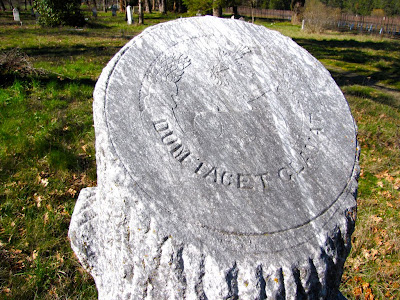 Sparlin Cemetery
Posted by Unknown at 6:22 AM

Email ThisBlogThis!Share to TwitterShare to FacebookShare to Pinterest
Labels: annette stott, markers, woodmen of the world

What is your email address? I would like to email you regarding a cemetery in Canyonville, Oregon. Thank you!

Send me your email address and I'll send you mine.