It just looks as if I’ve been lazy. Maybe a little bit lazy.

I have finished Lone Fir: The Cemetery and am waiting for proof copies to come from the press. Now all I have to do is sell it. Can I interest you in a dozen copies? Oh, good.

Elsewhere, including on Ape Shit, I’ve been ranting, but that’s avoidable, and put a number of new cemeteries on Flickr.

Coming up, though I’m not sure in what form, will be some installments on the next project: organizing the epitaphs. Starting with an initial collection of 1700 epitaphs, I’ve whittled it down to, perhaps, closer to a thousand or twelve-hundred of some merit. I’ve assigned each epitaph to one of eleven categories and am currently breaking down further the category of quotes appearing as epitaphs, which I call “borrowed” epitaphs. Right now I’m tracking down song lyrics which fall into two major groupings: Christian songs or pop ballads, with a certain amount of overlap.

I’m still working out the form of presentation, so it’ll be a while before installment one comes out. Have faith. Below is a sample of a database: 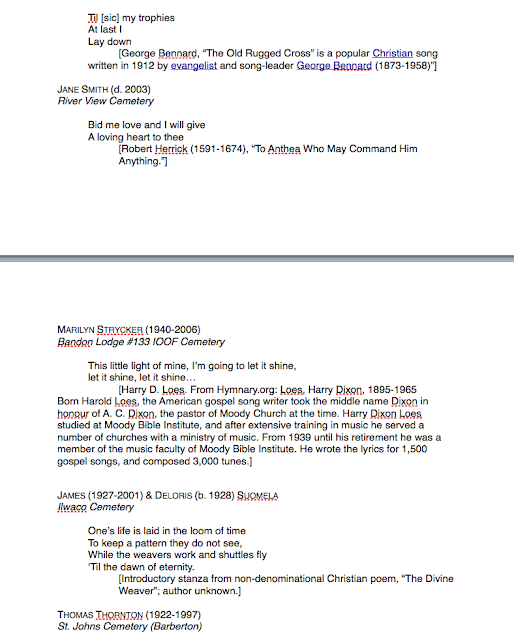 Email ThisBlogThis!Share to TwitterShare to FacebookShare to Pinterest
Labels: epitaphs