One a Year
Long-Liners: Fishing by Hand 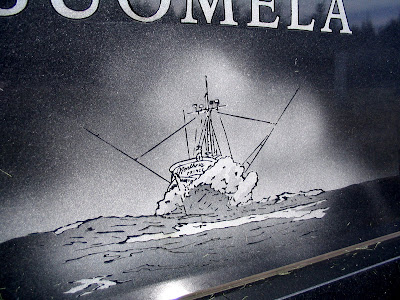 Ilwaco (WA) Cemetery
Old Man Petersen slouched in the booth and stared across the blacktop at the plant bearing his name: Petersen’s Seafood. He didn’t take his cap off, but there wasn’t much to cover, anyway. His face was dark and furrowed from years of standing up to hard weather. His hands curled around a cup of coffee.

“Lost one a year for every year of my life, on average,” he said. That would be more than seventy fishermen; almost all men. He laid it out as a fact, like last year’s catch. “Every year someone doesn’t come back.”

Now a-days we get updates from Shortman on who’s died in the past year, but now it’s from cirrhosis or cancer or heart attack or suicide, not from a slide into Davy Jones’ locker. A couple years ago when Roger Fisherman (as distinguished from Roger Treeplanter) took himself out of the race they blew his remains off into the South Slough with a canon. Third person they’ve done that way. Around here Hunter Thompson would just be one more guy. One who didn’t fish.

Back then, there were still fish. Back then, the harbors were stiff with boats and the docks lined with processing plants. Corporations and sea farming and overfishing had not yet crashed the business and it was still dominated by little guys. One owner to a boat; one boat to an owner. An extra hand or two and you’re off to catch the wizard. It was a romantic, if deadly business. A man’s boat could mean the world to him; just ask his wife. It may have her name on the side, but the boat was in his heart. 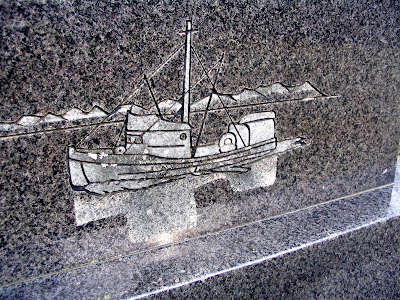 Peaceful Hill Cemetery (Naselle, WA)
They are the classic fishing boats that these engravings illustrate. These are the kinds of boats I went out, ever so briefly, on. These are long-liners. Those tall poles sticking up from the side of the boats are just what they look like: oversized fishing poles that trail behind them hundreds of yards worth of fishing line set with hundred of hooks spaced evenly apart. The fisherman’s job is attaching bait to each and every hook and, God willing, removing fish from the same. And gutting the fish and throwing them down the hold and packing them in ice. In a storm. In a raging sea. With water walls sweeping the decks. 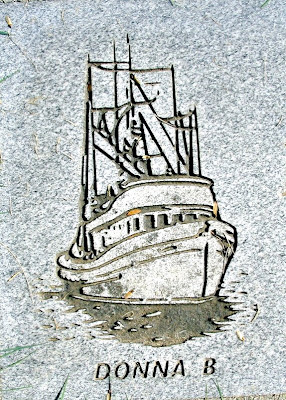 Eureka Cemetery (Newport, OR)
The poles also might have flopper-stoppers attached to them, which are steel plates secured to the poles by steel guy-wires. The plates race along side the boat a few feet below the surface, with their flat side parallel with it. The difficulty of pulling the plates out of the water broadside to are what make them effective in slowing down the rolling of the boat, hence the name. Should one of the flopper-stoppers actually escape from the water, God forbid, duck, because it’s going to come crashing through the cabin wall on the opposite side of the boat in a split-second.

Five of the six engravings shown here are of classic boats, all except the boat from Peaceful Hill (which looks more like a gill-netter) with the reflection in the water, which I threw in because of the unusual nature of the illustration.

Ocean View Cemetery (Warrenton, OR)
One engraving includes the Astoria Bridge, which crosses the Columbia from Oregon to Washington at that point. One can’t get much more place-specific than that on a tombstone.

The most dramatic of the engravings is that of the Northern Prince breaking the waves, poles lowered, the bow hidden behind the crest. It’s the only engraving that hints at what it feels like out there when “the minutes they turn into hours.”

The last Blogging a Dead Horse covered bowpicking gill-netters from the Columbia River. Long-liners ply the open ocean. One look at this collection and there’s no doubt: we’re not in Kansas, anymore. 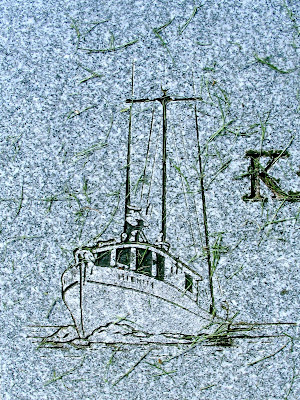 I happy to see so many boats on gravestones!! You did a great job telling the story!

Thanks, Diane. It's been fun. The next installment that I've yet to write will be on "working boats" other than fishing boats. After that something on pleasure craft.