Woodmen of the World
Unite: A Photo Gallery: I 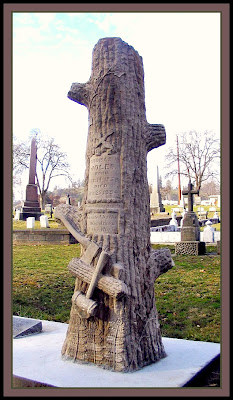 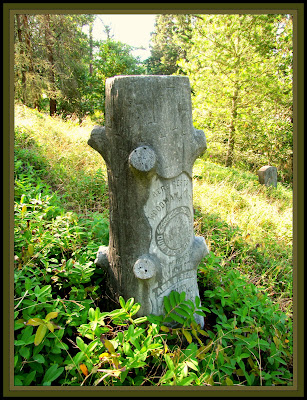 Granite Hill Cemetery
No one forgets their first Woodman of the World faux stump headstone. Cemetery novices tell you in an excited voice of this incredible find they made in a small cemetery near their home. Yep, WoW, as they’re known. The stump—fallen tree and all that—is a traditional symbol of death and has been used informally both here and in Europe for a long time, but the Woodmen of the World, in its program of providing tombstones for its members, kicked the image into high gear (can I say that?). 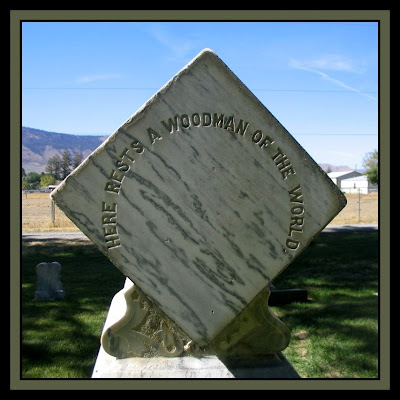 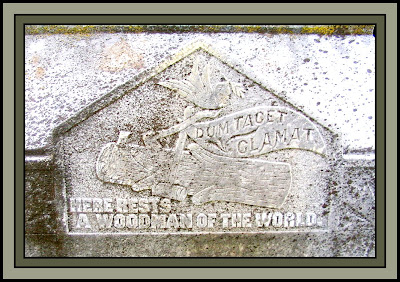 Riverside Cemetery (Albany, OR)
Hard information on WoW headstones is hard to come by; I don’t think there’s been a book about them, yet (authors take note). As this gallery attests, faux stumps were not the only motif the WoW used, but they were definitely the most notable. What’s particularly notable is that, despite their popularity and ubiquity, as far as I can tell, each one is unique. My understanding is that orders and drawings were sent to local craftsmen to execute the monuments, who in turn interpreted the drawings as they saw fit. Whatever the cause, the result has been a windfall of unique monuments across the entire country. In lieu of the book yet to come (I’m open to offers), I’m going to present here a selection of WoW headstones in a series of posts; there are too many for a single run. 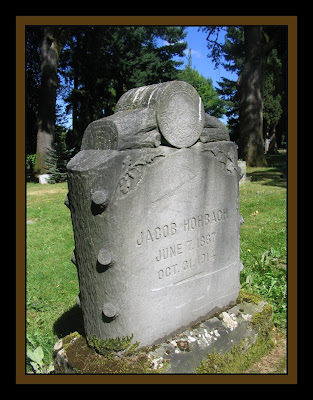 Lone Fir Cemetery (Portland)
Testimony that at one time, at least, the WoW folk were more than a simple insurance agency is via a fabled performance venue in Eugene, OR, the WoW Hall, which was my introduction to the Woodmen of the World. Their active involvement in the WoW Hall has long since passed, but their name remains stuck with the theater they put together, which was—and still is—a showcase for some amazing performers. My most memorable nights there were watching Reverend Chumleigh and the Flying Karamazoff Brothers, along with Artis the Spoon Man, doing amazing feats of derring-do never equally anywhere, except, perhaps, at the Country Fair (little children, be warned). I’ll forever have a picture burned into my memory of Robert, the Juggler, backing offstage, his hands afire with lighter fluid, eyes as wide as pancakes, trying to keep the flaming tennis balls in the air before screaming. Ah yes, the good old days. The WoW Hall. 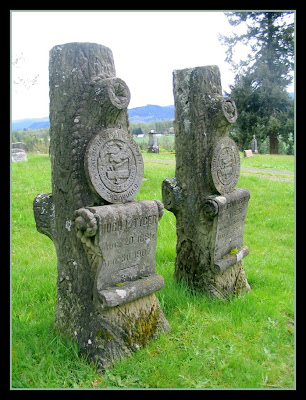 Brownsville Pioneer Cemetery
The Woodmen of the World still exist—they’d be happy to sell you some insurance—but their policies, alas, no longer come with a tombstone. It’s a pity, but we’ll just have to suffer through. Carve your own. 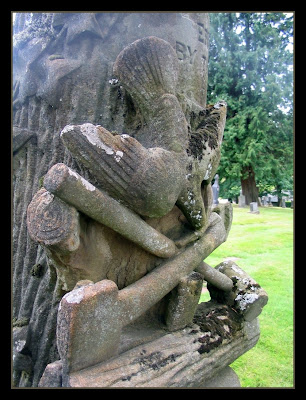 Mount Calvary Cemetery (Portland)
Technical Note:
The framing for these pictures was done in Picnik, as a part of Flikr. It's slow, but I found opening two windows at a time (thank God for Firefox) kept me going full time. The hint to use it came thanks to fellow Flickrdick doubledcop. If anyone else wants to use the basic program (there's a "premium" package one can pay for), I have a couple hints. A) You can put multiple frames around one picture by simply repeating the process. B) When choosing frame colors, the little eye-dropper will pick up the color from wherever it's pointed, not just the color chart provided. I like to get my frame colors from within the photo itself; that way I'm sure the colors are complimentary. 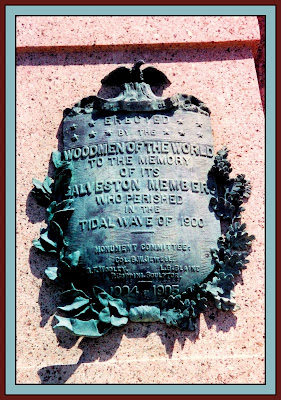 Great post...I have collected a number of WoW stones myself and was going to one day do a post on them as well. Too bad I couldn't find enough information to do it. I still may get around to doing it one day...

Thanks. More photos to come.