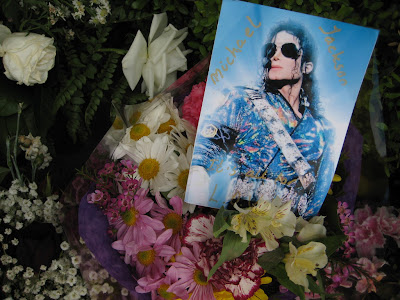 Forest Lawn
Photo: LuisAHHH!
In 1917 a thirty-six year old man from Liberty, Missouri, Hubert Eaton, took control of Forest Lawn Cemetery in Glendale, California, and rechristened it Forest Lawn Memorial Park. The American cemetery would never be the same. Mr. Eaton’s singular achievement was to remove death from the cemetery. It was not without precedent. The very word “cemetery” was promulgated in preference to “graveyard” for the same reason a hundred years earlier; so, to replace “cemetery” with “memorial park” was continuing a time-honored, euphemistic tradition. Only sex provides as many linguistic deflections as does death. 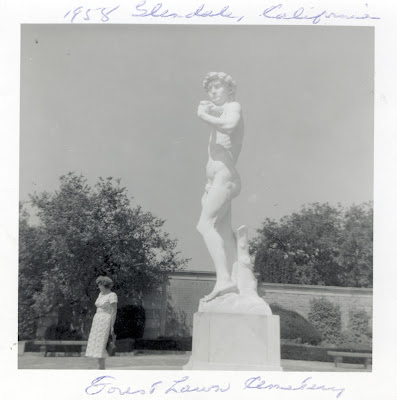 Forest Lawn
Photo: Striderv
Eaton went further, though, than merely changing the name; he went on to ban the most potent symbol of the cemetery, the tombstone. Eaton insisted that all markers in his cemeteries (he eventually took over/created others) be flush with the ground. When Hubert said “lawn,” he meant “lawn.” That it is much cheaper to mow a flush lawn than to squirrel around a forest of headstones didn’t hurt, but it may have been more important to Eaton to eliminate the perception of death in his cemeteries than it was to save money.

If Hubert Eaton would have confined himself to eliminating the presence of death in his boneyards, this story might have ended a lot differently, but like many people, he had a vision he felt the rest of the world deserved to share. A devout Christian, he populated the edges of his lawns with oversize reproductions of statuary from around the world. Findadeath.com assesses the situation succinctly: “Somewhere along the line, someone convinced this guy that he had good taste.” He even went so far as to build a wedding chapel on the Glendale grounds and began offering weddings in a form of cradle-to-grave service. It worked, just ask Reagan, the Acting President. 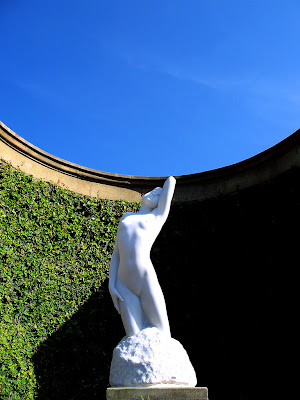 Forest Lawn
Photo: davewetsprocket
No cemetery since Mt. Auburn in Cambridge, Massachusetts, changed the landscape of American cemeteries the way Forest Lawn did. Almost overnight, virtually every cemetery in the country became a lawn cemetery. Thousands of little stone forests became surrounded by low, lumpy fields. New cemeteries were inevitably named “memorial parks” and were lined with Christian gods and demigods. Landscaping was rarely unified or thoughtful. The tradition of elegance begun with Père Lachaise was abandoned for the streamlined hucksterism of Southern California. Only the Veterans Administration with their necklace of National Cemeteries has invested heavily in dignified landscaping. There is no American standard of good cemetery design, and furthermore, it’s not a topic of public discussion. How could one possibly influence cemetery design? Isn’t that like asking how could one influence car design? Or bridge design? Or rocket design? 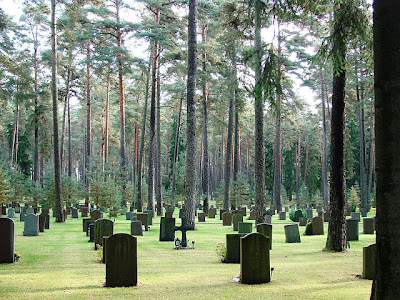 Woodland
Photo: danielvirella
Three years before Hubert Eaton showed up in Glendale, Sweden announced a competition for the design of a new cemetery for the City of Stockholm. Two young Swedish architects, Gunnar Apslund and Sigurd Lewerentz proffered the proposal for what became in 1994 a World Heritage Site: the Woodland Cemetery, Skogskyrkogården. Unlike the disjointed American lawn cemetery divided into discrete, unrelated “gardens” designed to pull ones thoughts away from death, Woodland Cemetery was conceived of as an aesthetic unity whose scale, elements, and plantings are constructed to guide the mourner through the reflective stages of the circle of life. Trees lining the path to a chapel change from birch to fir as the passage darkens and ones thoughts condense. Woodland celebrates death with a Nordic sobriety, but it doesn’t shy away from it. It does not deny death. 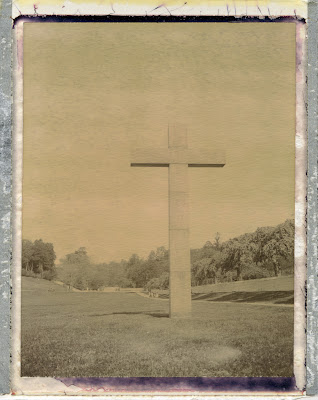 Woodland
Photo: Johan Rubbestad Lilja
It is, perhaps, unfair to compare Forest Lawn with Woodland which has more in common with the VA cemeteries, as they are both public entities, they don’t have to make a profit. Even a non-profit has to turn a profit, unless it has a tax base. Woodland makes use of its largesse by incorporating expansive lawns that really are lawns, they don’t contain graves. Those are mainly confined to the woods proper where uprights are welcome. Headstones here are not uniform, but they are all of a modest height and design; the theory being that there is equality in death. And while the private expression of religion is acceptable, despite Lutheranism being the state religion of Sweden and despite the open entry sward being dominated by a massive granite cross, Woodland is officially non-religious. Its pocket guide says the cross “is not intended to represent a symbol of faith, but rather a symbol of the circle of life and death.” Works for me. 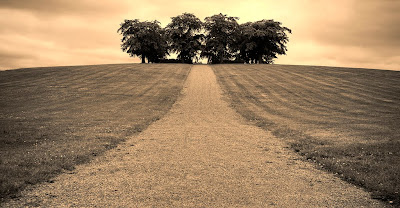 Woodland
Photo: Roy van der Zwaan
One of the more dramatic and photogenic features of the cemetery is a “meditation grove” atop a gentle rise in the center of the entry sward. A stairway ascending to the grove is slowly rendered into lower and lower steps to ease the climb. In typical Scandinavian thoroughness and with a refined sense of line and proportion, literally no step is left unplanned. As much as any cemetery in the world, Woodland is the leading example of what can be done to a cemetery. Woodland proves there can be death with dignity. 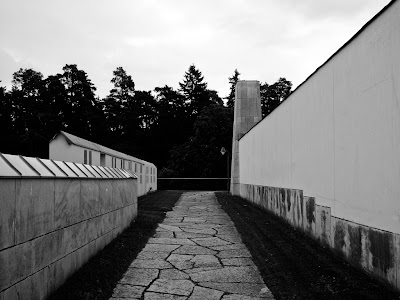 Woodland
Photo: j.meunier
Fast forward to 1994, the year Woodland Cemetery joined UNESCO’s World Heritage List. Far to the south of Stockholm in the countryside of Catalonia, a cemetery by another pair of architects, Enric Miralles and Carmen Pinós, also winners of a competition, opened after ten years of construction: Igualada Cemetery. It hasn’t been named a World Heritage Site, yet, but it’s young. Its day will come. 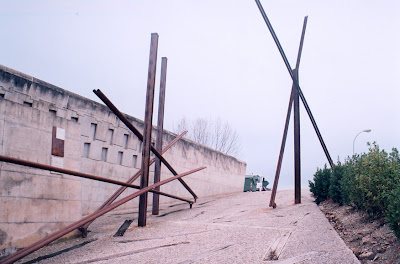 Igualada
Photo: jgeis
Named for a nearby village, Igualada exposes Catalonian sensibilities and reflects the Catalonian landscape. This is definitely not Sweden; the harsh aridity of the climate is not mitigated by moistening fogs and persistent drizzles. The deep pile and verdant vistas of receding greenscapes and somber forests are replaced by walls of loculi and gabion. Instead of ascending hills, one descend into valleys. Instead of trees, the entrance is guarded by cor-ten beams rusting askew. Interiors have the sense of having been carved out of the mountain rather than enfolded in the forest. It is a more strident nature than Woodland, yet it’s in the Woodland mold of using nature to express its purpose. 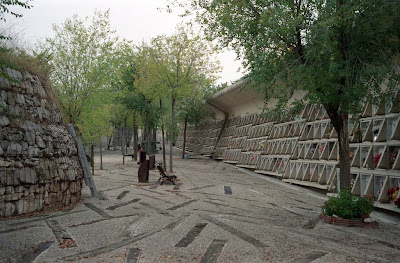 Igualada
Photo: marcteer
Burial customs differ from Catalonia to Sweden; the Mediterranean speaks a different language than does the Baltic. The dead are not interred permanently in the ground, but are instead stored in walls of loculi five tiers high, which are leased in renewable, usually, leases; but which, again usually, are, eventually, allowed to expire, after which the bones are removed to an ossuary and the loculi are reopened for leasing. 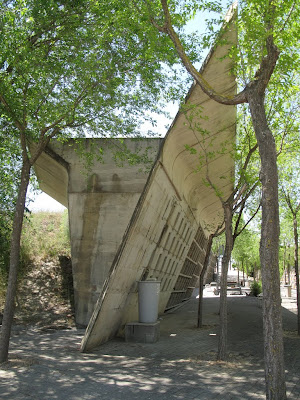 Igualada
Photo: Velcro
The dominant materials of Igualada are stone and concrete. Sometimes, as in the slanting loculi walls, the concrete is amazingly ephemeral; whereas interior spaces have the cool depth of massive blocks and shafts of light. Using gabion walls to define landscaped space was an interesting choice. Gabions are walls made of wire mesh enclosing rock, broken concrete, etc. Their life span is dependent on the integrity of their wire mesh. One is tempted to imagine a Mayanesque future of crumbled gabions sliding through ruptures in the wiring like rock rivers pouring from the mountainside. The cemetery is designed to pull the visitors through the natural environment and cause them to contemplate the circle of life. In that it repeats the goals of Woodland. 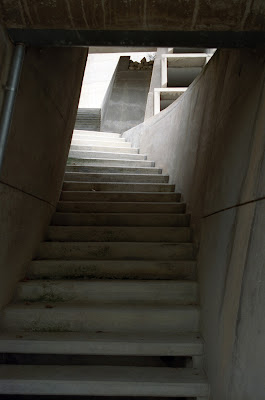 Igualada
Photo: marcteer
How different from Forest Lawn whose very purpose is disguised as a theme park. How appropriate that Forest Lawn should be brought to us by the land that brought us Disneyland. Most likely Igualada, like Woodland, is a municipal cemetery. One can hardly imagine a commercial cemetery lavishing that much attention and cost on landscaping. Cemeteries used to be a civic prerogative in this country, but it’s been a long time since any town I know sponsored one. We can’t even count on the Mason or the Odd Fellows, anymore. Ah well, we still have the VA.

But what if next time the city decided to put together a new park, it doubled as a cemetery. Might even help pay for it, no? Just a thought… 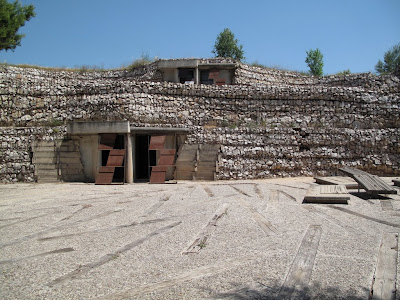 Igualada
Photo: Velcro
Coda
My thanks to my fellow Flickrdicks for providing the evocative photos of Forest Lawn, Woodland, and Igualada. Feel free to use my photos of, oh, say, Milo Gard. Or what the heck, Logtown.
Posted by Unknown at 6:31 AM