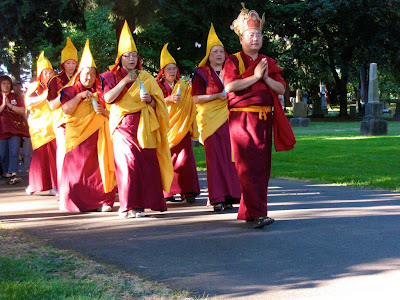 Lone Fir Cemetery
In Oregon’s formative years when she was learning to fly with her own wings, some surprising groups of people helped shape the future. In their day they were significantly important and often times made up a considerable portion of the population. Take the fur trappers, for instance. Instead of being rough and tumble mountain men from Appalachia, or wherever, they were more likely to have been mixed Indian/Euroamerican people known as Métis; and if not them, then East Coast Indians. Even more unlikely is that a third of the trappers were Hawaiian. Trapping crews were most often shipped west around the Horn, which required (in sailing days) a swing past Hawaii if one wanted to reach North America. It was closer and cheaper to fill up ones crew with Hawaiians than to drag people from the East Coast. Exactly how those Hawaiians accommodated themselves to snow-bound Cascade winters is unknown. There are still Métis around who remember their role in settling the territory, but I’ve never met a Hawaiian who knows anything about the trappers. They simply disappeared.

The Chinese, on the other hand, played an enormous role in civilizing the West, and they haven’t disappeared. Even though many of the early arrivals have. They disappeared, not because they were forgotten or laid in unmarked graves, but rather because the Chinese government paid to have their bodies exhumed and returned to China—men only, thank you. Apparently this process was repeated several times at twenty-year intervals.

The Chinese were particularly active in mining camps, not merely as cooks and launderers, as the movies imply, but as the miners themselves. At times, for example, a third of the miners in Canyon City were Chinese; while in Golden, Oregon, when the entire town packed up for a new strike, their places were filled with Chinese who only had to give the claims back when the whites later returned because the new strike didn’t pan out. At times, Chinese were eliminated with “extreme prejudice,” as it were.

Yet nobody else wanted their people back. The Finns never sent to bring their children home from Astoria. Missouri never called for the return of her sons and daughters gone on the Oregon Trail. The English never brought their ex-pats back to Camelot. Only the Chinese. 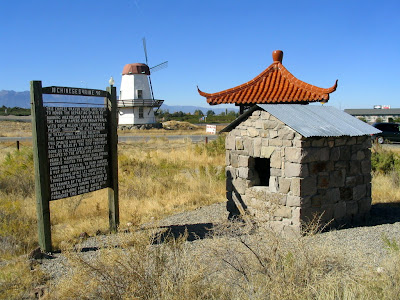 Chinese Cemetery - Baker City, OR
That this happened in Portland has been news for some time, and there are plans afoot to memorialize those Chinese, as well as the women and children who were left behind. And that it happened in Baker City is well known because the historic Chinese cemetery in that city is bolted next to the freeway and marked by a sign board; a small pagoda; and a tiny, stone one-room prayer house with a tin roof. Aside from those amenities, what’s most noticeable are the holes pockmarking the surrounding. Whoever did the exhumation forgot to fill them in.

What’s surprising is how extensive the exhumation practice was. Besides Baker City and Portland, it happened in Astoria, Coos Bay, Albany, Ontario, Ashland, Corvallis, Roseburg, Pendleton, and The Dalles. Whatever else, that can’t have been cheap; even if you used Chinese labor.
Posted by Unknown at 7:03 AM