This is a bakery story.

The bakery might well have been Erin’s first job after hitting Eugene. Fresh out of Hines, she was looking to run her life a little more freely after a dark childhood at the edge of some of the most unpopulated country in the lower forty-eight. Hines is the wrong side of the tracks next to the desert tough town of Burns. A childhood friend who moved to Hines from elsewhere told how Erin befriended her and became her protector. “Where I came from, girls didn’t fight, but they sure did in Hines,” she noted.

You probably wouldn’t want to get in a fight with Erin. She was the hardest worker we had and charged everything head-on, Devil take the hindmost. She had a boisterous laugh and a prurient sense of humor that could make you cringe. She fit in well at the bakery.
Erin decided, in a moment of weakness, to straighten out her life and went into rehab (outpatient), the most momentous result of which was getting pregnant by a fellow reformer who subsequently disappeared. He’s not a part of the story.

Enter Dan Dreier. Dan was a minor partner and driver at the bakery. Besides being eloquent and a keen observer of human nature, Dan has an extraordinarily warm heart, as we shall see. Dan also likes the ladies, and had spent some time with Erin as work buddies and, perhaps, a bit more. Nothing serious. When Erin popped up preggers sans partner, she asked if Dan would mind attending birthing classes with her and be part of the process. Dan, already having two kids, figured he knew something about the process and agreed. “I was the first person she saw when she came out,” Dan grinned, recounting Ariella’s birth.
Dan became Ariella’s de facto father in absentia. He was there for her growing up years and his family became, de facto, her family. At one point adoption papers were drawn up to officially make Ariella, known in her youth as “Lolly,” a Dreier, but other factors intervened and it didn’t happen. Then.

Until years later, when she’d graduated from high school, she turned to her mom and announced, “I want to be adopted by Dan.” Dan, a longtime bus driver for Lane Transit Authority, immediately agreed. Because the paperwork had been filed years before, the adoption was quick and smooth. The Eugene Register-Guard wrote a story about it. That’s where we heard about it, having lost contact when the bakery folded.

As time went on, the relationship between Erin and Ariella shifted. Ariella became her mother’s caregiver. Although still young, she had to monitor her mother’s emotional mood swings; the bull-headed wildness of the outback never left her. For many years, Erin found a measure of stability in her partner, Christine, and the three of them—Erin, Christine, and Lolly—shared a charming house with an enchanting backyard in a hidden Eugene neighborhood of mature trees, bungalows, and no sidewalks. Erin and Christine periodically went to California to aid Christine’s aging mother.

We knew none of this until the miracle of Facebook—don’t get me started—brought us in contact some months back. It was fun, albeit a tad embarrassing, to be in touch with Erin again after all these years. She gushed so much over how she loved working for us and how she loved us as people. It was great exchanging pictures and running through old memories. Lolly was born less than a month after our son, Mathias, and Erin babysat Matty, as he was known way back when. Mathias and Ariella have not seen each other since those days. Erin still looked like Erin despite the decades intervening and despite graying, now longer, hair. Her broad smile engulfs the entire photo.
A few Fridays back, Ariella, as per usual, went off to work. Christine was not home and her mother was, as per usual, still in bed. She didn’t get up to see Ariella off. She didn’t get up to answer the phone, either, when Ariella repeatedly called home. Ariella finally called some friends and asked them to go by and check on her mom. They found the house open but the door to Erin’s bedroom locked. Ariella has a key to her mom’s bedroom, so she took off from work and went home. Her friends waited. After unlocking the door, they found it still barricaded. They managed to push through an opening large enough for Ariella to skinny through; she’s not big. The bedroom has an adjoining bathroom. Ariella found her mother in the shower in a pool of blood.

The coroner said she’d died from “multiple gunshot wounds.” There was an old 357 magnum hanging around the house forever but without any shells. At some point, Erin had, obviously, bought shells, hid them away, and told no one. For the first shot, she stuck the barrel under her chin, but deflected by bone, it exited her eye. For the second shot, she stuck it into her temple. That worked.
What demons?

We all think, “If they had to do it over again, they wouldn’t.” I think that about my dad. Sometimes, yeah; but two shots? She had her chance to say, “Well, I won’t do that again,” and she did. She did it again.

All we know is that they had to do it.

Finally, it is quiet. It is quiet to the edge of the galaxy and into deep space. If you listen very, very closely, you can hear the hiss of the Big Bang. Then there’s nothing left but you and peace. 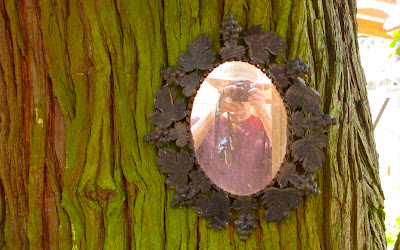