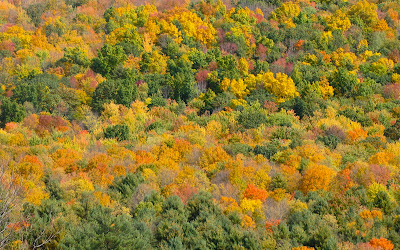 We’re pretty much convinced that the New York state of mind is it. There’s not really a state that goes along with that city. I mean, how would that work, the city would be larger than the state? New York, it’s bigger than anything except California and Texas, right (we’re not sure Alaska counts; it’s not truly a part of the U.S.).

We do know that New York is surrounded by other suburbs they call boroughs and that there’s practically an unlimited number of them. Famous boroughs are Brooklyn, Long Island, and New Jersey. Apparently, there’s a hilly, Jewish park called the Catskills where all the Jews go for comedy shows. It might be part of Central Park; we’re not sure.
There’s supposed to be another city in New York called Buffalo, but that’s highly unlikely. Why would they call a city in New York, Buffalo? That would be like naming a city in California, Fugidaboudit. Well, there is a city over there called Buffalo, but it’s in Niagara, not New York. Easy mistake to make; everything so crammed together over there.

I was out there recently in a place called the Finger Lakes, and I won’t go into that anymore than that. Enough’s enough. While there, I chanced upon nine cemeteries that I visited. Two-thirds of them I ran into by accident, whereas I intentionally hunted down three cemeteries in Ithaca. Not only was I not in Kansas anymore, I wasn’t in Oregon, either. They speak the same language out there, but it’s different. Maybe it’s part of the U.S., maybe it isn’t. They accepted my money. 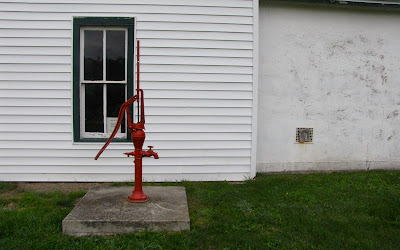 It is cute out there, and the architecture is fantastic. There are perfect villages that looked dazzling in their fall colors. The lake I drove around, Cayuga, is rimmed with vineyards producing, rumor has it, unpalatable white wines. Quite where they grow their grapes in somewhat of a mystery as the roads aren’t flanked with vines as they are in other wine producing areas. This is no Alsace. Nor Oregon, for that matter.

Still, these glacially scoured lakes up to forty miles long and no more than two-and-a-half wide that settle into slumps in the earth have an unmistakable charm that lack of vines doesn’t diminish. One could live here under certain privations, but comfortably, nonetheless.

Cornell University, high above Cayuga’s waters, lords over Ithaca lapping the southern terminus of Cayuga Lake. It inspires no end of loyalty and love from its alums and faculty and deservedly so. It’s a proud and venerable institution in a marvelous setting. What more could a college student hope for? 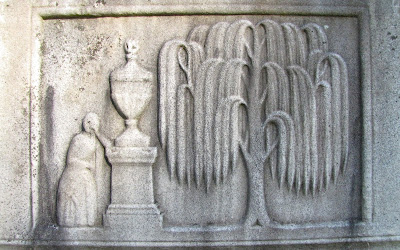 It has, though, not inspired a flourishing for the death arts, so to speak. Death around here is still subdued and restrained. Diamond engraving has reached tombstones here, but grave decoration and homemade monuments are scarce to non-existent. Ithaca cemeteries are fairly sober affairs with little of the exuberance exhibited on the West Coast, which, frankly, surprised me. It is, I’m sure, a cultural thing. This is a part of the world where the 18th and 19th centuries reigned supreme, and in one way or another they’ve become locked into that mindset. This is a part of the world where “transcendentalist” still has meaning.

Granted, though, New York is a big state and the East Coast is bigger yet, so my nine cemeteries visited aren’t even a drop in the bucket. I can make no comparison nor draw any conclusions. I saw what I saw; that’s it. 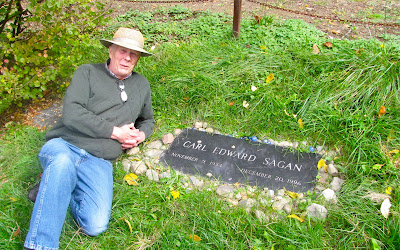 I saw Carl Sagan’s grave. If you don’t know who Carl Sagan was, you should quit reading this blog and go play basketball or something. You’ve no business here. If somebody told me this was the stone that Jesus rolled away to rise up from his tomb, I’d be nonplussed, but Carl’s grave, that’s something else. Carl really existed. And I understand that Carl was a modest guy and talked in a much more soothing voice than Garrison Keillor; still, something more than a flat stone with name and dates would be nice. A little respect, eh? 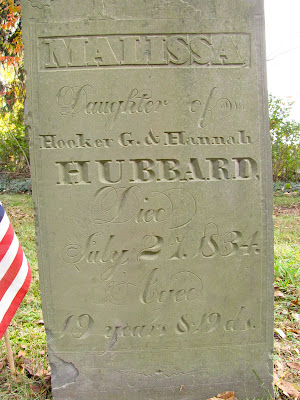 Aside from Carl, what I liked best were ubiquitous, thin, severe stele from the early part of the 19th century, with shallow illustrative carvings and the most delicate flourishes in the script. Picture the “John Hancock” signature on the Constitution, then translate that into stone. Considering the technical nature of the carving, the fineness of line is noteworthy. They could use a program of identification and restoration for many of these stones; they are a local treasure.

It is probably best I don’t live east of the Mississippi. The sheer number of cemeteries is overwhelming. The maps show scads of them and I ran across others not listed. I didn’t begin to stop at all those I saw. I’d have to move there. And New York is but one small part of a vast territory. At least in Oregon I have a chance at knowing what’s here. On the other hand, I could have found my 850 cemeteries a lot closer to home if I lived out there.

All-in-all a fruitful if too short trip.
Posted by Unknown at 9:33 AM