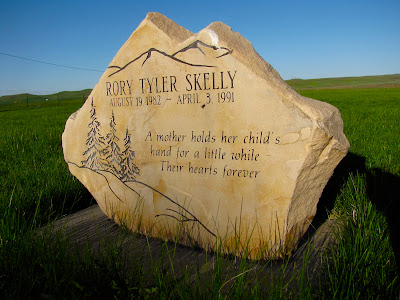 It was not always thus.

We all know how the past is a foreign country with strange garb and customs. We hardly know our grandparents for their antiquity. We accept change as a constant.

Yet time itself changes through time. The apparent length of a day or a life or a millennium has bent and twisted through the ages to mean different and, perhaps, contradictory things to different peoples. For millions of years, time couldn’t have been more than an awareness of days and seasons, of aging and death. Time existed as a cycle, not a direction. Change itself was cyclical. Yesterday would return as surely as tomorrow would fade.

It was the Dream Time. It was when we shared the Earth with the other animals instead of riding dominion over them. The world had not yet been given to us.

At some point in time, change began happening fast enough to notice. At some point, innovation happened fast enough that one person could recognize its arrival: “Hey, when did you start wearing that style of moccasin?” By the time written history arrives, we can track changes in culture and plot a direction. Time becomes less circular and more helical.

In the graveyards of Oregon, we have a touch over 150 years of time etched into stone. We can wander the rows and see the styles change before our very eyes. If we look at them all, we can see the arc of our culture has diversified and draws its messages for the future from a much deeper well now than in the past.

Epitaphs are necessarily parsed through the context of their era. Who merits a headstone, much less an epitaph, is not evenly distributed through society at any time. Cost limits availability, style, and size of monuments. The handmade, wooden headboard will be swallowed up by the elements long before granite or marble will. Different elements of the culture, differing ethnic and religious groups, different eras, have different ways of approaching memorialization; what is custom to one, might be unheard of to another. How interpersonal relations are handled on tombstones offers us a window onto previous times; we can see the trend towards informality (not to mention secularism) writ bold on the rock faces. 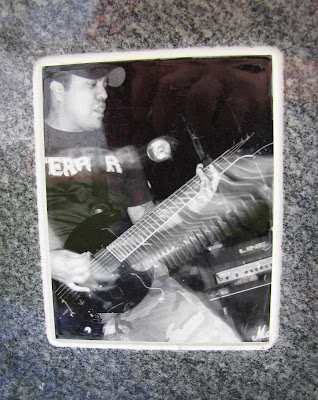 The early tombstones of the Oregon Territory reflect both a more homogeneous populace than today and one that took its inspiration from a narrower range of options. Early (1840s-1910s) epitaphs have a much greater tendency towards standardization, set in formal dialogues reflecting as much the choices of the broader community as those of the interred.

It’s not just that people of earlier times were less inclined to write their own epitaphs rather than borrow them from already written sources than people of today, but rather that they chose their selections from a restricted field and one that probably didn’t reflect their own personal experience so much as the dictates of chapbook collections of sentiments written anonymously for such a purpose. Such chapbooks still exist and are still in use, though the contents have changed. Most funerals homes have them, and they’re readily available on the Net. In such instances, it’s the community which fashions the epitaph versus the individual.

It’s doubtful, for example, that William Miracle’s wife, who I presume arranged for his epitaph in 1905, ever thought, much less wrote:

Oh Love I am so sad and lonely
Here without you upon the earth
That the fairest spot in its realm
Are to me but desert dearth.

Written for the distaff side, it doesn’t get much better. An 1887 epitaph for G. W. Prosser is slightly less ornate:

My wife, how fondly shall thy memory
Be enshrined within the chambers of my heart;
Thy virtuous worth was only known to me,
And I can feel how sad it is to part.

I’m sure Mr. Prosser loved Mrs. Prosser, but I’m not so sure how often he said, “My dear, you are enshrined within the chambers of my heart.” Maybe he did.

Nor do I think that many people were inclined to say “doth,’ even back then.

Although he sleeps his memory doth live
And cheering comfort to his mourners give.
The stilted nature of those epitaphs, though, was not universal. Ira Goodell’s epitaph from 1894 is shockingly modern.

“…how we would make the kisses fly.” 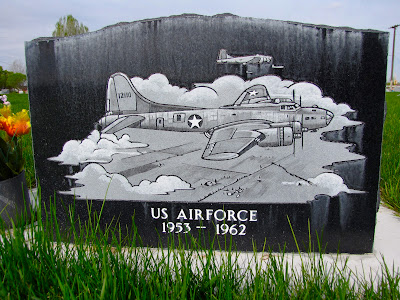 That leaves one with an entirely different impression of their relationship than does “thy virtuous worth.” I’m not saying the Goodells had more fun than the Prossers, but they might have been more fun to party with.

The early period of epitaphs in the Territory was followed by a period of sterility where epitaphs almost disappeared. Cost was undoubtedly a factor, but equally important was a cultural shift away from recognizing death. The lawn cemetery became de rigueur and the customs of memorial day began to wither; there was no longer a grave to maintain. Gravestones were lost in a sea of uniformity. There was little room for sentiment on small, plain, stone tablets level with the ground.

The modern era, which begins slowly in the 1970s, dumps the conventions of old and strikes out in innumerable directions reflecting a new polyphony of beliefs and eschatologies.

Returning to the theme of romantic epitaphs: the category didn’t exist substantially until the turn of the twenty-first century when they blossomed in a fine mist. Inevitably, wrenched from the dependence on preordained scripture, the new epitaphs vary greatly in sophistication and sensibility. Many, if heartfelt, are mundane. Some, though, transcend the ordinary and reach into the poetic. Often, of course, the velvet words are chosen from an extant work and as often it’s hard to discern the authorship of many epitaphs; but a conscientious collector can find genuine gems hidden in the marble bosque. 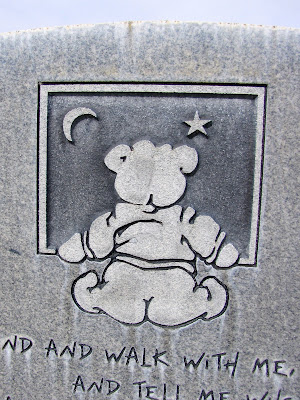 They, too, fall into recognizable categories, many of which emphasize the permanence of their life together and how it transcends time and corporality. Eddie Hogan (b. 1939) declares that view in its simplest terms. Speaking to his wife, Debbie (1954-1994), he declares:

My wife til the end of time.

Whereas The Heffners, David and Barbara (1952-2002), frame the same feeling in a metaphor:

Our highway
Will never end.

That sense of bonding drifts through many epitaphs. Esther Knight (1991-2008), while only seventeen, emphatically declares:

We were in this together

Which says oodles about who they were and on what their marriage was based. 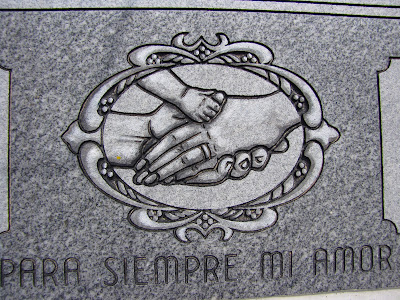 A pair of anonymous bridge players—A.C.B.L. Life Masters—in the Lower Boise Cemetery had an equally endearing take on what trumped their relationship:

He led diamonds
She returned hearts

Sometimes it’s recognized that the road to eternity is only interrupted. It’s not sure if it’s Darlene Urban talking in 2007 or if it’s someone talking to Darlene, but her epitaph reads:

I’ll find my way back to you by heart.

On the other hand, there’s a good chance it was a wife who wrote to Richard Banker in 1995:

Often as not, the author is merely trying to say “I loved you” in a meaningful manner, one that resonated between them. I have to think it was Eugene (1909-2001) Petucho speaking to his wife Anne (1908-2002) when it was written on their tombstone:

Eyes so dark and dear

Maybe it was the other way around.

Who is speaking on the Sauerwein’s tombstone, Shirley or James who died in 2005?

I love you to your toes

Likewise, is Lillian (1915-2005) Engel speaking from the grave or is someone speaking to her when her marker says: 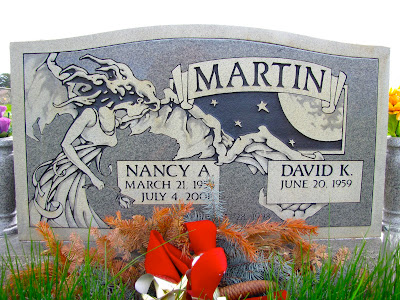 And who walked with whom as recorded on Erten Brock’s 2005 stone?

I walked with you once upon a dream

On the other hand, it’s pretty obvious to whom Nathan Hand was speaking when he wrote on his monument:

Searching for Linda
on the Oregon Trail

We don’t know if he ever found her. We hope so.

The pressing question is what will happen to epitaphs in the future? Will they disappear along with cemeteries? Will the dead of the future be relegated to mantlepieces then attics and then left behind in the chaos of a long-distance move? Or will they be scattered in streams, on beaches, off mountain tops, or buried in gardens? How will people say they love each other when there is only the wind left and the faint humming of computers? Will anyone care that there once was poetry?
Posted by Unknown at 4:30 PM

Email ThisBlogThis!Share to TwitterShare to FacebookShare to Pinterest
Labels: epitaphs

My mother had vascillated between burial or cremation for years. Just the other day she told me that she wanted to be cremated but then have the ashes buried. She wanted a headstone. She said that she wanted the world to know that she had been here in this world and that she mattered.