I began this blog with the intention of trying out ideas here before attempting to publish them elsewhere.

The two following photos and accompanying notes are the first installment of a longer photo-essay on cemeteries and the sense of place. The scenes etched on these stones are essentially the scenes one sees if one lifts ones eyes while standing in these cemeteries. One could find similar scenes north of them in the Palouse, but no one would mistake them for Kansas. Or Massachusetts. They are rooted in place.

In the future we'll look at gravesite ephemera, epitaphs, and the cemeteries themselves as emblematic of place. 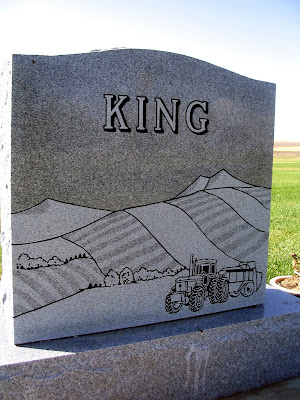 Athena Cemetery (Athena, OR)
There is little question that these two stones are the work of the same artist; they match almost perfectly. The Potter stone hails from Arlington, OR, a tiny (pop. 524 as of 2000) town on the banks of the Columbia River east of the Cascades. It came into existence as a cattle shipping station, but the cemetery marker clearly illustrates the current farm crop, wheat. Heading east on Interstate 84, Arlington is the last hamlet before the highway rises off the bank and begins its slow drift away from the river. The land above Arlington is known as “high wheat country” and is broad, lonely, and marked off dramatically by plowing patterns, such as those stylized on these stones. There are always mountains on the horizon and the vistas are immense.

Athena is better than twice the size of Arlington, which still doesn’t make her very big, but she’s off the highway and keeps to her own traditions. At times known as Mud Flats, Yellow Dog, and Squaw Town, she lays in the same rich Columbia Plateau as that above Arlington where rolling treeless hills stretch forever towards the river. That both cemeteries should have stones carved with the same vision is not surprising. If the common design didn’t convince you that you were in wheat country, the tractor on the King monument should clarify matters. Now, one might be tempted to add wind generators to the tableau.

Judging by cemeteries alone, one might think Arlington the larger of the communities, but its size reflects both its past and the large area it services. It is exceptionally well maintained and has a fine group of Woodmen of the World faux stump monuments, as well.
Posted by Unknown at 4:59 PM