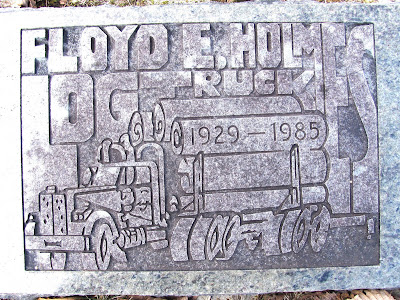 Reedsport Masonic Cemetery
Last week I made a quick trip to a stretch of the southern Oregon Coast, visiting old haunts, old friends, and a handful of cemeteries. It will take me a little time to get all the photos uploaded onto Flickr, so I can’t as yet link you to the cemeteries; but I reaped a handful of interesting epitaphs that I figure wouldn’t hurt to display now. In fact, proportionally, I did better with epitaphs than with monuments. Who knew they would be so literate down there?

It must be said that Coos County and the Coquille River Valley form a world apart, only tenuously attached to the rest of Oregon. Or the rest of America, for that matter. We’ve long observed that, not only do they march to a different drummer down there, it’s not clear that they even have a drum. What is true is that there’s more farmable land in the valleys of Coos County than anywhere else in the Coast Range, though much of it is hidden to the casual visitor. The hills are not as tall here as they are to the north and south, yet they scramble the countryside thoroughly and snake valleys far away from what passes for civilization in these parts. Despite being an area of early white settlement, there is still a rawness and roughness prevalent here that has long since been wiped from the rest of the Coast. Only recently did the logging mills disappear from the Coos Bay waterfront, and only now are tourists making serious inroads into pockets near the sea. Still, it will be a long time after the headlands are rimmed with second homes before the vacationers will make significant forays into the interior. It’s a long ways back in there and it’s not clear to where it goes. Road signs in the mountains can be scarce or lacking altogether, and winter is not the time to get lost in there. Wisdom says, stick to maintained roads and don’t drive at night in the rain. Highways can slide down hillsides with no notice. 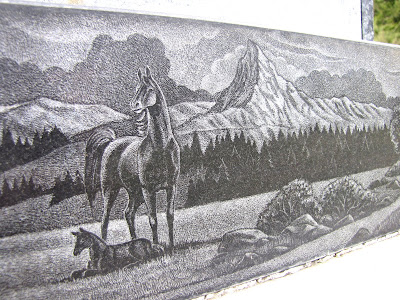 Sunset Memorial Park
But enough geography. On to the epitaphs:

The first two cemeteries I visited are actually in the Umpqua River drainage, to the north of Coos County. The Umpqua harbors its own particular culture which interacts considerably with the Coos/Coquille folk, but which is strikingly different, as its major agricultural and population center is far inland and has distinctly different growing conditions from the fog-shrouded, drizzled coast.

The Daileys, Paul (1928-1991) and Marcella (1932-1999), repeat one I’ve recorded elsewhere: “Where there walks a logger there walks a man.” A search of the Internet turns up references to a CD of the same name as that phrase from the 70’s by one Buzz Martin of “Five Rivers area,” Oregon; early and local enough to have been the inspiration for both my citations. On the other hand, there could be a prior source for all of them.

Claude (1922- ) & Frances (1923-1998) Friend have a gorgeous bronze plaque that also carries a reference to logging, of sorts, but theirs is a little less strident, a little more welcoming. Indeed, with its folksy twang and soft edges, it’s got “Jimmy Stewart” written all over it: “Tried to leave the woodpile a little higher than we found it.” They claim “four beautiful daughters,” who are surely warmed by that woodpile to this day. 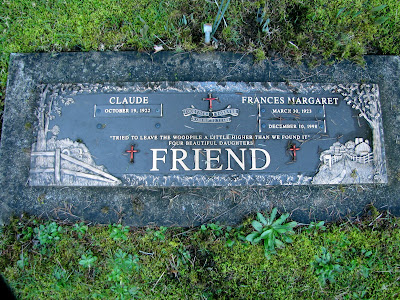 Scottsburg Cemetery
The next town downstream from Scottsburg is Reedsport, which, while founded in 1852, wasn’t platted until nearly fifty years later. Reedsport is more or less the town at the mouth of the Umpqua, though that honor is technically held by the smaller Winchester Bay (which predates Reedsport by two years).

The Masons provided the main cemetery in Reedsport. I recorded a couple interesting epitaphs from there. Jamie Palmer (1983-1999) represents the occasional constant in epitaphs: the enigma. Hers is “They’ll always be five.”

Five what? She was sixteen when she died. “They” implies people. Are we talking age or number?

Advice (other than the “ones good deeds live after them” sort) is scarce on tombstones, but some people carry their idealism to the grave. The twenty-year old Steven Mix (1953-1973) left us with an uplifting homily, reflecting, perhaps, his youthful ardor:

When we finally get to Coos Bay, we find the cemeteries dominated by lawn cemeteries, and despite the concentration of population, the metro area offered the slimmest pickings. In fact, the only interesting memorial I recorded was a modest one to the quasi-mythic distance runner, Steve Prefontaine (1951-1975), for whom this was his home town. Steve died in a car accident but he is still honored here in his home state. His is the only upright tombstone allowed in Sunset Memorial Park. The epitaph is unassuming: 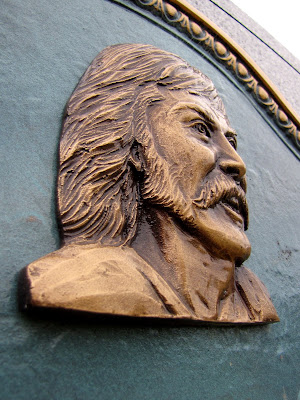 Sunset Memorial Park
It was the delightful and obscure Coos River Cemetery, though, that provided the best lode of epitaphs. It’s listed on ePodunk as the South Fork Cemetery, but don’t believe it. The handmade sign says otherwise.

When it comes to obscure and inscrutable, William Gilmore (1839-1937) is in a class by himself. Shortman and I stared at his stone for a long time, but came to no conclusions. Whatever Mr. Gilmore was trying to say, it went to the grave with him. You tell me what you think it means:

Theinheriet laws
matter is the crea-
tor of the universe

Go ahead, read it as often as you like. 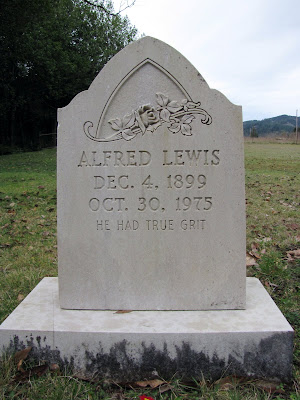 Coos River Cemetery
Al Lewis’s (1899-1975) stone is notable for its simple elegance as much as its John Wayne inspired epitaph: “He had true grit”; whereas Alice Spear’s (1923-1989) epitaph is notable for its playful nature. The marker was adorned with musical notes, so I presume the epitaph was lighthearted:

They said she was too different
and she wrote too many tunes.

I miss my friend.

And so it goes. 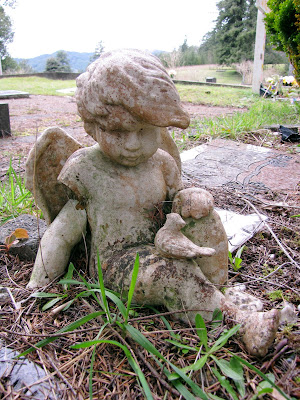