Cove Cemetery
Fellow Flickrite, Mr. Ducke, trenchant observer of many things, cemeteries included, tendered the perfect phrase in a recent communication regarding the removal of ephemera from behind the berm at Willamette National: “I am sure that you have noticed the following heartening trend. I have found in the last 10 or 15 years that people are 'taking back' [emphasis added] the cemeteries. The volume of offerings and decorations seems to increase yearly, and new sandblasting techniques have resulted ina personalization of gravestones mostly lacking in the 20th century . Ultimately, asmost cemeteries are run as businesses, they will have to realize that if they refuse to allow people to express the rituals of mourning and remembrance that have now become meaningful to them, they will take their business elsewhere.” 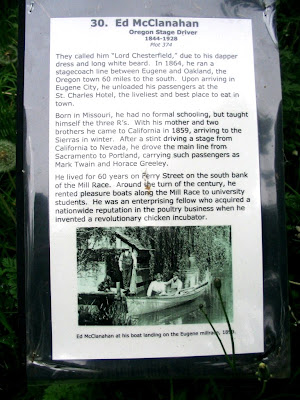 Eugene Masonic Cemetery
In August of 2007, The Sunday Oregonian highlighted that very problem with a piece titled, “Oregon cemetery plots go begging.” The paper and the industry clearly laid the blame on cremation leaking away the cemeteries’ business, without probing deeper into the cause of that phenomenon. Cost has certainly been a factor, but no more so and probably less than the rise of the lawn cemetery, which squashed the very reason for a cemetery’s existence in the first place: as a place of memorialization, not just for the deposition of bones. What Mr. Ducke highlighted is the countervailing trend: the movement to take back the cemeteries. To express that personalization and to make the cemetery a meaningful place once again. That movement is being expressed again and again everywhere I go, and I’ll be surprised if it hasn’t hit your quarter, too. We like to think we’re cutting edge up here in the Left Corner, but we’re all cutting the same cake. 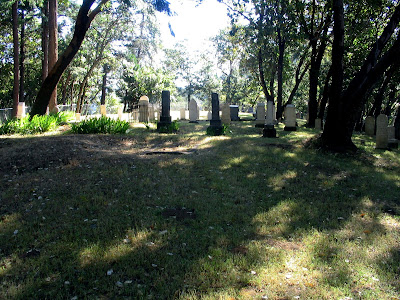 Myrtle Creek Pioneer Cemetery
The Sunday Oregonian, to their credit, has noticed the cemetery revival, as well, and in January of this year featured an article entitled “Monument revival,” subtitled “Once neglected, heritage cemeteries [the new name for “pioneer cemeteries”] see the light with renewed interest in forested settings, native plants and tourism”; concentrating in particular on two stars of the Oregon cemetery world: Myrtle Creek and Eugene Masonic, both of which, indeed, are exemplary. Myrtle Creek, while meticulously restored with impressively beautiful, new ironwork gates, is essentially frozen in time, whereas Eugene Masonic is experiencing a new sense of purpose as well as a renewed interest as a place of burial. Where Myrtle Creek is painterly perfect and harbors an air of Renaissance serenity, Eugene Masonic is a robust work-in-progress brimming with life and bustling with people and dogs and wild life. The two could not be more dissimilar. Nor more alike. 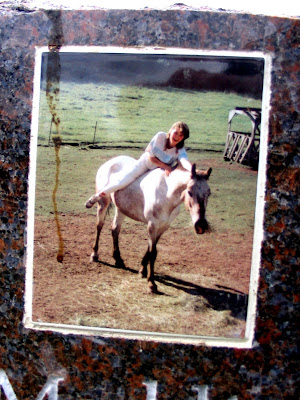 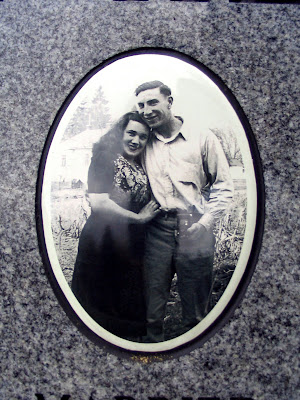 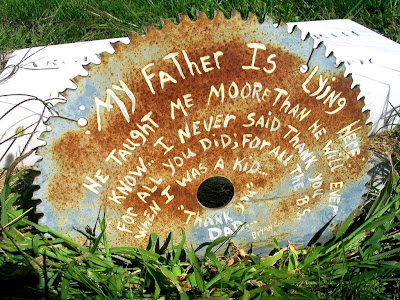 Echo Cemetery
Both stem from a tide which has inundated the Northwest. The reasons are complex and varied, but probably the biggest single factor has been the Internet. That and the Mormons. Strictly speculating, it appears that the cemetery revival has been a function of the explosion of interest in genealogy. The Mormons, of course,. take genealogy seriously and have done monumental work in amassing demographic data from all over the world. It was that amassing of information which allowed the average person a chance at tracing their own genealogy without having to travel the country over, if not the larger world. The placing of the same data on the Internet has cut out the middleman (i.e. the Latter Day Saints) and allowed the home researcher even greater unfettered access to voluminous vital statistics. Once people could find out where their great aunt died, the next logical step was to hunt up the grave; and nothing spurs interest in cleaning up a graveyard like a personal visit. There has also been in the latter half of the 20th century a large increase in interest in preservation in general of both the natural and built environments, largely, I would imagine, as a reaction to the demolitions and modernizations of the postwar era and as an attempt to maintain ones identity in a rapidly changing and globalizing world. In any event, the cemetery revival has run parallel with the broader folk and vernacular preservation revivals. (Steve Mayes of the Oregonian did an extended piece in 2005 on the revival of the Gribble Family Cemetery near Canby which well illustrates the turn-around process in reviving a heritage cemetery.) 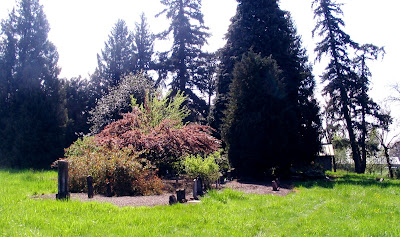 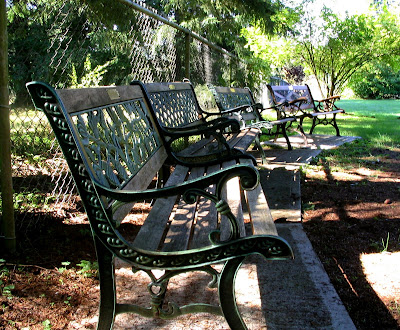 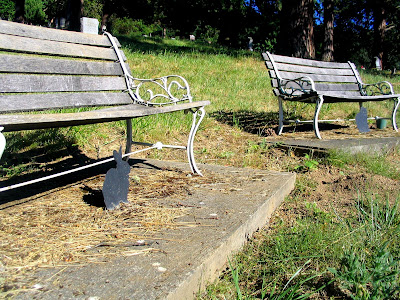 Wilbur Cemetery
The movement to take back the cemeteries is wide spread. Mr. Ducke lives in Massachusetts and I report from the Northwest corner of the country. And the movement reaches all corners of the region, not stopping at a few favorite cemeteries. If one were to count revival by new signs, new fences, and new flag poles alone, the numbers would be staggering. Few have been left untouched these recent years. Everybody’s lawn is getting mowed (except for those contrarians in Eugene!). And not just individual cemeteries. Whole cemetery districts are witnessing solid support every time a cemetery referendum appears on the ballot. These days of severe belt tightening might change that, but up until recently there was no sure bet like a cemetery levy. School levies are always chancy, but cemetery levies fly though unscathed. We may not all have kids, but we all die. 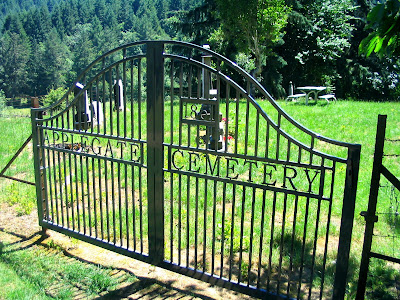 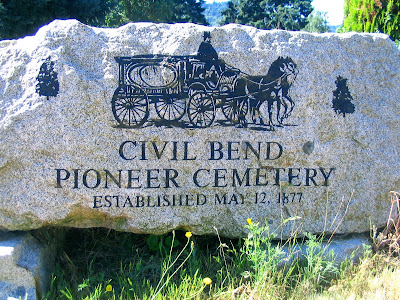 Civil Bend Cemetery
A few examples, if you will:

Wilbur Cemetery down in Douglas County has new benches adorned with hand cut metal animal figures at their feet. The four-family Moehnke Cemetery in Clackamas County likewise offers a row of four new benches. Cove scattered stone/concrete benches through its cemetery, but you’d be hard pressed to notice them, being overwhelmed by arguably the most awesome entrance arch to any cemetery in Oregon. Gates are popular. Myrtle Creek may have the pièce de resistance, but not far away in Yoncolla the venerable Applegate Family Cemetery also sports a new entrance. Sometimes cemeteries are resuscitated in multiples. The small, paired Washington cemeteries of Amboy and Chelatchie have new fencing, new benches, new flag poles, and freshly planted cherry trees, yet. The folks in Estacada maintain nine pioneer cemeteries and recently passed another support levy. The Rainier Cemetery District smartly maintains ten cemeteries, making mega-Portland with but fourteen cemeteries a piker in the pioneer business. The ironically named Civil Bend Cemetery in Winston, once out of the way and somewhat forgotten, newly greets one with a large boulder incised with the cemetery name, founding date, and image of a horse-drawn hearse. Ever cute, hyper-Western Echo put in, not only new fencing, but greatly expanded parking to accommodate increased traffic. It’s a tourist destination, as is every right-thinking cemetery these days.

Forest Lawn Memorial Park
The list continues as far as the cemeteries stretch. No region is immune. It’s more than a fad; it’s a sea change. If lawn cemeteries are struggling, traditional cemeteries are booming. (Some lawn cemeteries, it should be noted, have made strong moves to recapture the upright market, curtailing in the process their lawn tendencies. Forest Lawn in Gresham has devoted a large percentage of its turf to uprights; while Lincoln Memorial Park, which began as a “rural” cemetery before transforming itself, as was common, into a lawn cemetery, is innovatively approaching many areas of the market at once, from building an upright pagoda garden to allowing full new sections of uprights and creating landscaped cremains grounds.) There are more pleasant places to die than ever before. A little advertising, and the cremation business could take a significant hit. The future of the cemetery business is not written in stone. The glory days are still to come: the Boomers have yet to fade away. 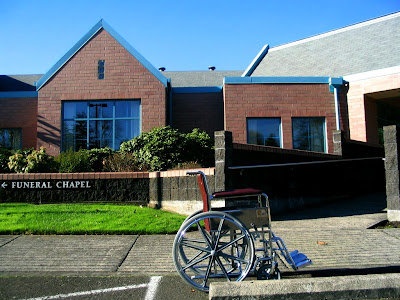 I awarded you the KreativBlogger award! Just go to my blog to get the details!

I awarded you the Kreativ Blogger award, too! You should really feel loved, now!