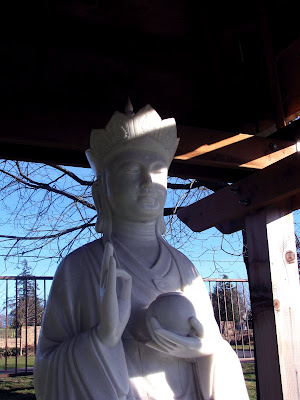 Sunnyside Chimes Memorial Garden
Before taking care of business, I want to introduce you to Betty Blade. Betty lives somewhere in Gotham and keeps tab on the cultural geography of her city through her camera. That should be credit enough, but Betty busies herself by filling in the gaps and rounding out the corners of most of my Flickr entries. She adds all the tags I should be adding but don’t, thanks to incurable laziness (you can laugh, but it’s a deadly disease). More importantly, she often adds tidbits of information or excerpts from poems or song, etc., that speak to whatever photo she is amending. Her far-ranging intellect pulls gems from all over the cultural canon, and without her, my site would be much the poorer. I have no idea for how many people she provides this service, but her efforts on my behalf are prodigious. I jokingly call her my “Boswell,” but she’s nothing of the sort. She’s not chronicling me, she’s augmenting the collection. I owe her big time. 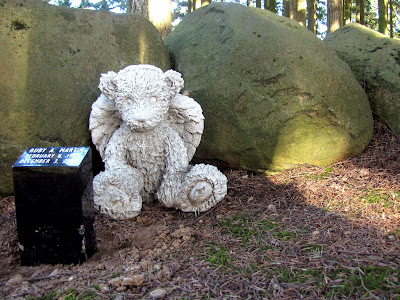 Sunnyside Chimes Memorial Garden
It was Betty who sent me the link to The Buddhist Channel with the story about Oregon’s first Vietnamese Buddhist cemetery, complete with a new statue of a Buddha (which doesn’t, I warn you, look like our traditional vision of a rotund Buddha). That I should first hear of a Portland cemetery story via New York City amazes me, but I thank her for it, nonetheless. 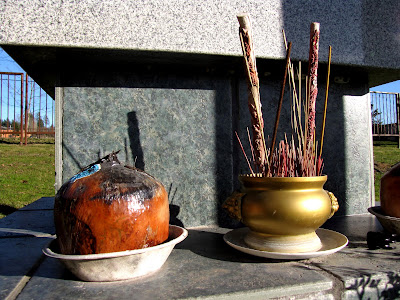 Being a cemetery within a cemetery is not uncommon here in Portland; besides these examples of SE Asians, there are Jewish cemeteries within two of Metro’s fourteen pioneer cemeteries. (Metro is a local government agency which handles a lot of our civic housekeeping duties.) The Portland Japanese Cemetery is surrounded by Rose City Cemetery, but in that case the two cemeteries are independent of each other.

While its significance may be lost on the rest of the continent, we in the Pacific Northwest pride ourselves on being the doorway to America. Without a doubt, if not the first, then the ample majority of the early immigrants to North and South America came through the Fraser and Columbia River valleys after slinking down the coast from Alaska. That there should be a continuing steady influx here of immigrants from Asia should not be surprising. And the silver lining of our disastrous military foray into SE Asia has been a healthy wave of newcomers from Vietnam, Laos, and Cambodia. Once again, their loss is our gain, and consequently we have better restaurants than we ever had. (Me, I’m all for invading Italy. Preëmptive strike against the Mafia. Think of the gastronomic gains!) 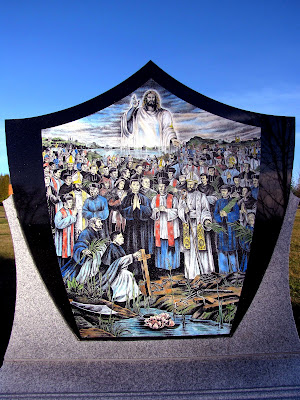 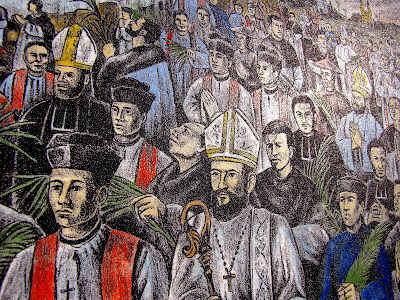 Gethsemani Catholic Cemetery
The colored hand-etched stone face from Gethsemani Catholic Cemetery has no inscription of any kind and is not a part of its SE Asian section, though it clearly has SE Asian elements in its design. The racial composition of the vast crowd is intriguing. This upright is the only upright in the cemetery, though they are being allowed in the Buddhist venture across the road. Almost all the stones in the Catholic cemetery have laser-etched portraits or photoceramic cameos. The Buddhist cemetery is too new to have a track record, but it looks like it will be dominated by portraits, as well. 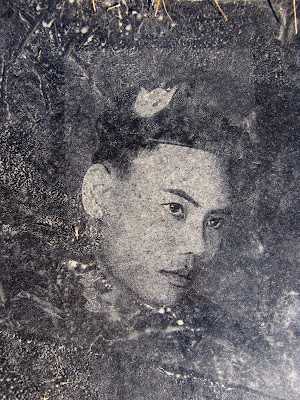 Gethsemani Catholic Cemetery
On the secular side, the largest Asian “cemeteries” are parts of Lincoln Memorial Park, an old “rural” cemetery on Portland’s East Side, which contains a traditional Chinese cemetery; another Vietnamese Catholic section; a new upright section used, not exclusively but heavily, by Asians; and an even newer pagoda cemetery with preset, identical headstones. I’ve seen a similar arrangement being constructed in a Seattle cemetery and presume it’s following an existing Asian pattern, but that’s merely a guess. The Lincoln Park burial spaces far outnumber the combined totals for Gethsemani and Sunnyside. 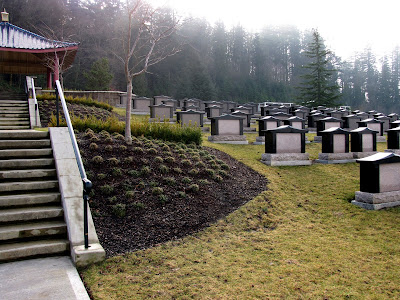 Lincoln Memorial Park
Posted by Unknown at 10:29 AM