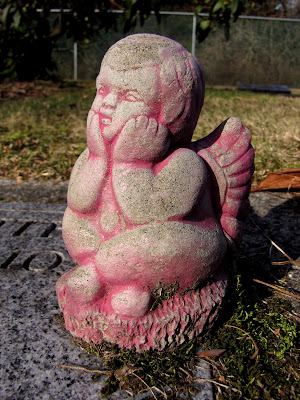 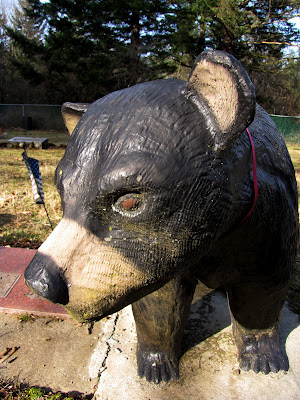 Old Carson Cemetery
If Carson has any claim to fame, it’s that the mother of my twins lived there briefly as a child.

Other than that, it’s hard to fathom why this unincorporated hamlet with a couple thousand people scattered up the valley should merit four cemeteries, but it does. This is the granddaddy of the public ones. It’s not but an acre big, and half of that was covered with a crust of snow when I visited. It has uprights, like a decent cemetery should, and a comfortable cover of older trees and bushes, which when I visited were in the process of being cleaned up after the winter’s winds. It’s not by accident that the cemetery across the road is called Wind River Memorial.

Carson’s larger claim to fame is the location of a hot springs, which was developed by one Isadore St, Martin, who the Home&Abroad Web site describes as “an entrepreneurial pioneer and local guide”; though he obtained his deed to the property via the Indian Homestead Act of 1875, the purpose of which was “to encourage Indians to engage in farming” and “provided 160 acres to the 21 year old, head of household, provided ‘that he has abandoned his tribal relations and adopted the habits and pursuits of civilized life.’”

Absolutely, that! We don’t want any unrepentant Indians stealing our land.

But I would venture that by his last name Isadore was not a local Indian but rather a Métis, and he probably came here as a trapper rather than what we think of as a “pioneer.” I’ll wager he came in no wagon train. He may well, though, have been a guide and he certainly was entrepreneurial. He also left a cemetery, q.v. 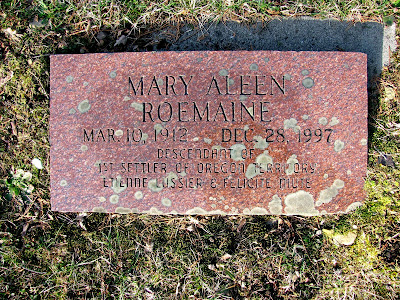 Old Carson Cemetery
And I’ll toss in a further “could be.” This cemetery also contains the remains of one Mary Roemaine, whose epitaph claims her as a “descendant of/ 1st settler of Oregon Territory/ Etienne Lussie & Felicite Niute”; and without getting into the boast of being “1st settler” or whether it was Lussie or Niute (my money’s on Etienne), I’ll further guess that Etienne was also a Métis and most likely connected to St. Martin in some manner; and I’ll go one step beyond and speculate that both men could have been refugees from French Prairie after the fateful vote was taken to join Oregon to the United States instead of Canada. Once that vote was sealed, the appropriating of the Métis lands began in earnest and their exodus from the farms they’d wrested from the wilderness was ordained. Isn’t democracy grand?
Posted by Unknown at 5:40 PM