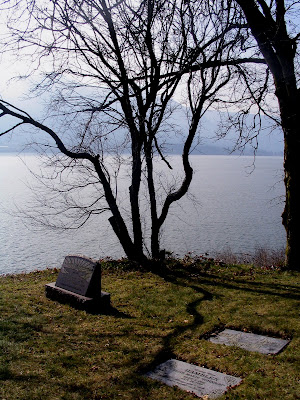 Bob (names changed to protect my lapses) was working diligently wiring sections of the chain-link fence to the railings when he saw me, waved, and asked, “Find what you’re looking for?”

“Well, since I wasn’t looking for anything in particular,” I answered, “I guess I did.”

Wearing the uniform of a sexton, jeans and a duckbilled cap, Bob sauntered over for some conversation. If there’s one given among cemetery workers it’s that they’re willing to chat at the drop of a shovel. They’re particularly willing to chat with someone who’s merely visiting out of curiosity rather than lamenting a recently departed soul. They’re always proud of the maintenance they do, and they want to share it with you. 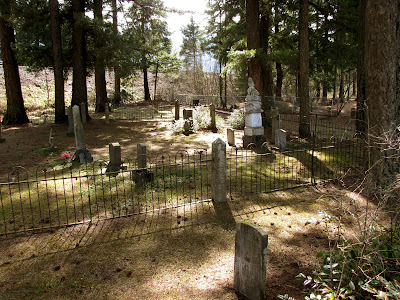 Cascade Cemetery
Bob does an exceptional job. Slim and energetic, smiles come easy to his angular features and his eyes twinkle as he lists the accomplishments of his four years on the job. He talked about a columbarium niche wall they’re erecting in the center of Wind River Memorial. 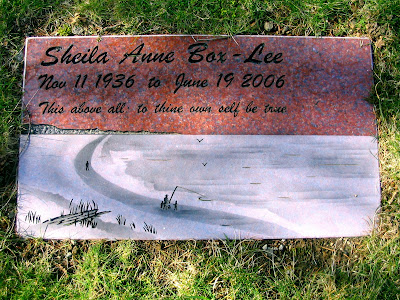 Stevenson
There are ten cemeteries in the Skamania County Cemetery District, double the amount I was expecting. “When I came on the job,” Bob said, “only a few of the cemeteries were being well maintained: these here in town and Stevenson down by the river, pretty much that was it. I said, nope. Our mandate is to take care of all the cemeteries, so I give them all equal treatment.

“I had one lady call up in tears. She said they couldn’t find the grave they were looking for until they realized that it was now out in the open and not covered up by the brush and weeds anymore. They were so happy!” 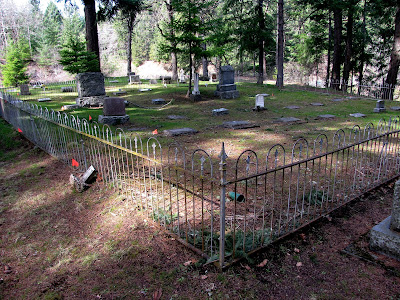 Underwood Chris-Zada
The cemeteries reflect that attention: they all look alive and well-tended. Each is a respectable cemetery in its own right, and a few are over-the-top delightful. Stevenson Cemetery, hugging the bank of the Columbia, has a location to, well, die for; whereas both Berge and Underwood Chris-Zada fairly ooze charm and attention to detail. Eternity looks pretty good from there.

“Nope, but I’ve got their addresses. Want ‘em?”

“Hop in. I’ll give you a ride to the office,” he offered, and then backed his truck up the hundred or so yards to a small building. 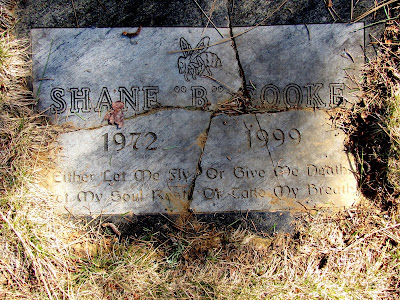 Berge
“Used to be, when I first came here, all the files for all ten cemeteries fit in one file cabinet,” he smiled, as some seven or eight filing cabinets crammed the office. “A lot of files seemed to have just gotten lost, and we’re working to resurrect what we can.

“We bought our own back-hoe this year, so we can open and close our own graves. We used to have to farm that out,” he boasted. “Bought that with cash, too.”

Bob wrote a couple notes on the copy of the addresses he gave me and walked me back to my car, where he set to repairing the fence again. 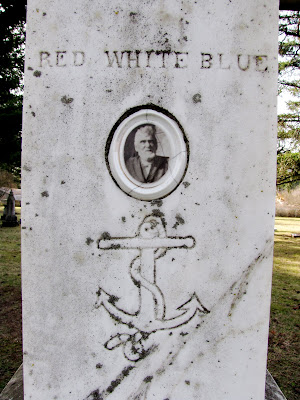 Cascade Cemetery
“Be sure and visit the Indian cemetery at Bonneville,” he told me. “It’s called the Cascade Cemetery, but it’s got some important people buried there. It’s maybe going to be on the National Registry.”

Snow still covered the ground in the shade, crunchy patches not a quarter of an inch thick, and the air wasn’t cozy warm yet, but spring was definitely in the air and Bob was busy making his charges the best they could be. I hadn’t planned on heading back past Bonneville, but now I had no choice. Gotta go see the important people. 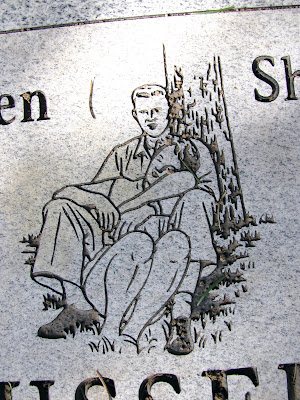 You never fail to entertain me with your writing and exceptional photos. So...who were the important people you went to see?

Very interesting! Beautiful setting too - Yes I was wondering who the important people were too?

The Indians. Although there were only the long dead ones, no recent dead, alas.