A note to let you know I’m still here but occupied elsewhere these days. I have done a little cemetery photography, which you’ll see by and by (a return to River View), but including a quick stop at the Palmer-Bell grave site in Washington, the Flickr entry for which (plus minor additions) follows this. If you think my cemeteries have suffered, you ought to hear my banjo. Maybe you shouldn’t.

Gardening takes up an inordinate amount of my time right now, with a lot of hours spent simply idling among and admiring the flowers. For the first time in our lives we have birds renting a bird house for the season, Bewick’s wren; and not just any bird house, but one our granddaughter made for her Grammy. A few days ago we started hearing the peeps of tiny newborns.

The rest of the time, the time where I carve out “writing time,” has largely been spent of late spitting out one more version of a small article which I write over and over again, usually stopping somewhere midway and abandoning the project for several more months or more, only to start over anew. It’s one of those quirky obsessions that lay people get into now and again, trying to prove one set of professionals or another that they’re full of hokey. I’m working on archaeologists, particularly those interested in human evolution.

Essentially, I’ve known for a long time where humans evolved. Ever since reading Desmond Morris’s “The Naked Ape” in the late 60s, I’ve known that the savannah theory of human revolution didn’t hold water and that water was the key to human evolution. It took me some time before I figured out just how water played its role in our evolution, the theories of the late 60s weren’t as advanced as they later became. The premise of “The Naked Ape,” which followed the seminal work of Alistair Hardy, which was popularized through Elaine Morgan, was that there was an aquatic phase in humans’ past, which caused the curious abnormalities shaping people: hairless, slow of foot, defenseless, etc. Hardy’s epiphany of the relationship between human body fat and that of seals discovered the obvious: water had something to do with it.

Which is does, and there’s been a group of adherents to that theory who have been hounding the profession ever since Hardy/Morgan/Morris went public. The profession, for its part, has resolutely ignored the water-babies, as it were, and stuck as religiously as possible to their theory that humans evolved on the savannah; but they’ve nonetheless slowly begun to adopt some of the probabilities of a water-based evolution theory. The evidence is too hard to ignore.

My addition to the fray has been what I call the demographic theory of evolution. It’s premise is that, essentially, we all currently live in the same place that we did when we first became bipedal: on the shore/beach/bank. We never moved; we’ve learned how to recreate that environment wherever we go, but, effectively, we haven’t left that environment. It was living on the beach that made us stand up for good; the pickings were too rich. The advantage of the demographic theory is that is avoids all but the most minimal ecological changes. Another name for the theory could by the Occam’s Razor Theory of Human Evolution. Occam’s Razor is, essentially, the geographical theorem that the shortest distance between two points is a straight line; i.e. the simplest explanation is probably the best. The demographic theory doesn’t have people moving from anywhere to anywhere to acquire all the characteristics they have now (including their migratory history); ergo, it’s the simplest theory of human evolution. By the rules of the game, if you have the more complicated theory, you have the burden of proof.

Anyway, that’s what I’ve been piddling away at. 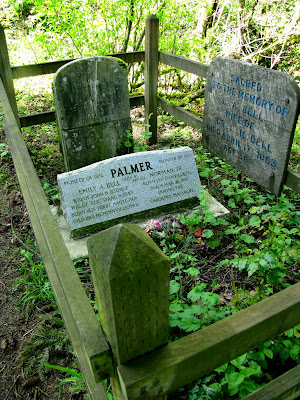 Not really a cemetery, containing but two-plus people. The “plus” being the leg of an Indian chief who, according to “Explorations,” a newsletter from the Columbia Gorge Interpretive Center Museum, lost it during “a shooting accident and was a friend of the Palmers”; a story which was repeated to us by a honey vendor parked there when we stopped by. Related to the old chief by marriage, the vendor also said that recently a buried skull was found in the course of some utility pole work and that everything was currently halted to see whether or not the entire place was an old Native American burial ground. If so, he claimed, then the Indians would own the bridge, which appeared to amuse him considerably. According to legend and backed up by geologists a large chunk of a neighboring mountain fell into and blocked the river about 500 years ago, providing a natural bridge across it until washed away. Legend has it that the bridge lasted for several years, but my guess would be that any blockage would have been cleared away the first winter, at the latest. I’m told the USGS estimates it to have lasted “several months.”

The massacre referred to on the stone was, according to the same “Explorations,” brought on by the “breach of the Treaty of 1855.” It’s an old and oft repeated story.

The man-made bridge, which stands where the natural bridge once was (or close enough), while suggesting a more mundane origin, is still a bridge for, if not of, the gods. Of all the Columbia crossing from Oregon to Washington, this is the most heavenly. The view from the middle of the deck is sublime. One can only imagine what it was like when the river ran free. Maybe someday…
Posted by Unknown at 8:40 PM