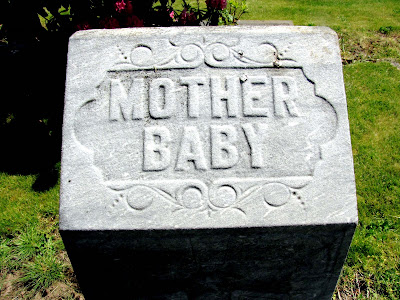 A Bit of Housekeeping:

I suppose I should have done something for Memorial Day, but I didn’t. I worked that day.

Too bad, too, as down at the local mausoleum they have a locked family room containing two coffins and a stained-glass window, which is open once a year for an hour and a half each Memorial Day. There are no known survivors to the two people entombed there, so it’s unexplained why the room should be secreted away. I suppose I could ask.

Saturday prior to Memorial Day we stopped to eat lunch (from a taco wagon in Brooks) at one of our favorite cemeteries, Belle Passi, outside Woodburn. I write a little bit more about Woodburn and its surroundings in the intro to the cemetery on Flickr at Dead Man Talking (hit link above), should you be interested.

Woodburn is an old (for here) town in the center of the Willamette Valley, which is the agricultural marvel of the Pacific Northwest. Belle Passi was a whilom town near Woodburn. The core of downtown Woodburn is Mexican these days, offering some of the best Mexican food in the state in a scattering of restaurants and bodegas. Throw in the Russian True Believers, who haunt the outskirts of town, and you have one of the most interesting burgs in the region. And it’s got an outlet mall and a drag strip to boot. What more could one want? 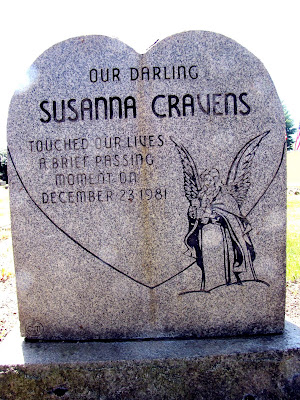 Belle Passi Cemetery
But back to the cemetery: The three photos accompanying this post were shot that Saturday before Memorial Day. There’s no significance to or connection between the three other than that I was struck by the pathos exposed in them. Children’s graves are often the hardest to absorb, but their poignancy acts like chili powder for the soul: it’s painful, yet we can’t walk away.

Not only are these children’s graves, but they all appear to be of children who didn’t survive birth or much beyond. From the tombstone alone, it’s impossible to tell if Susanna Cravens was stillborn or died shortly after birth, but she evidently didn’t survive for a second day. Carole Ritzenthaler was eight months pregnant when she and her baby died, although we don’t know the specific causes. Then there’s the sorrowful anonymity of the stone chiseled simply “Mother/Baby.” Given no other information, it’s hard to avoid thinking that mother and child died together at childbirth.

I have felt the pain.

And I feel so much better.

I’ve never been to war so I can’t say this from first hand experience, but I’ve read often enough of the great sense of relief that some people feel on the battlefield when a person next to them has just been killed; the sense of relief coming from the uncontrolled and very real relief of not having been killed themselves, of having dodged the bullet, very literally. I’m aware, naturally, of the guilty pain many people suffer from having had that involuntary reaction. In trying to figure out why I, myself, one, likes going to graveyards, I’ve come to suspect that part of it comes from the relief of still being able to go visit them, period. And perhaps unconsciously, the added pain of a child’s grave gives one the added burst of relief that it didn’t happen to them or their loved one. (And if it did, God bless them.) 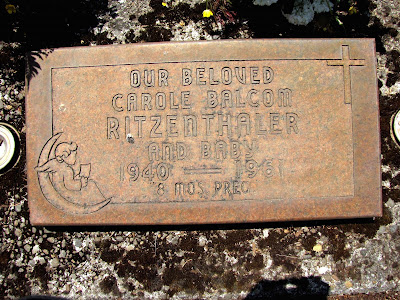 A quick “hello” to all you new duly registered “followers” of this blog (what the heck, hello to you old ones, too), and let me say how grateful and amazed I am that anyone finds this of interest. My wife and children don’t read it, trust me; so I’m delighted that others find entertainment and their own relief with these walls.

Our turn is coming. Let’s whoop it up while we still can.
Posted by Unknown at 7:45 PM

Johan, my man! You are in the spotlight over at Graveyard Rabbit's blog. Be sure and read the comments too!
http://www.thegraveyardrabbit.com/2009/05/meet-johan-mathiesen-author-of-blogging.html

I am Susanna Cravens mother. I found it very odd to see the head stone that I created for my daughter displayed on someones blog I don't even know. After some thought and about the the blog, I am touched that someone can feel my pain after all these years. Did you notice her fathers head stone just below hers? He can be found on the Military Citations for the Silver Star he was awarded in the Vietnam War. Susanna was premature and had I not delivered her I would have died from the infection in my body. She touched our lives for 45 minutes before she passed. My grief was so great that I never held her. I could not bare to watch her die. She does have an older sister but I never had any more children and I could not hold a baby with comfort until my grandchildren were born.