Cove Cemetery (Cove, OR)
It’s tempting, when considering maritime motifs on cemetery markers, to hark back to our liquid origins and suggest that boats on tombstones recall ancient associations with the water, but I don’t think that’s the case. Certainly, burning bodies on the banks of the Ganges before floating them down river smacks of primordial memory, but I think that water-craft images on Oregonian tombstones are on a par with other vehicular images, which fall into two rough classes: occupational and recreational. You’re either working that boat, or you’re drifting around dreaming.

Tombstone vehicular images, whether of wheeled, water, or air craft, are almost invariably masculine symbols. Occasionally they’re shared with a spouse, especially if one considers RVs, but primarily they’re a man’s world. Women might engrave their monuments with flowers, pets, or a piano (guys get guitars), but men are more likely to carve an image of something that moved. There are occupational images of things other than planes, trains, and automobiles — loggers get represented out here often and I’ve seen a printing press on one stone once — but there’s something primal about boys and things that move, be it skateboards or jet planes. Maybe it’s testosterone: tombstone images of big pieces of equipment are a way for a guy to display his cajones to the world forever. But movement is important. You don’t see images of desks or sales counters or drill presses or labs or cubicles or die stamps on tombstones. It’s train engines, tractor-combines, bow picking gill-netters, or 747s. If it doesn’t move, it’s not worth telling eternity about. 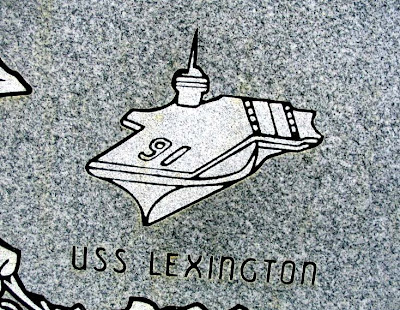 Oaklawn Memorial Park (Corvallis, OR)
Working boats tend to require bigger water than pleasure craft. There aren’t a whole lot of working boats on inland rivers and lakes, save for guide boats and a scattering of minor occupations such as catfish noodlers and frog catchers. A lot of the working boats found on tombstones are military craft, which, I suppose, is a category all of its own. I’m no expert on naval ships, they’re all destroyers to me, though I’ve had two engravings of the aircraft carrier USS Lexington. Naval personnel, of course, are drawn from the entire country and I don’t know if there’s any statistically significant increase of personnel drawn from coastal versus inland communities, but I rather doubt it. In any event, one would expect to find engravings of military craft following normal patterns of personalization over the entire country. I would further suspect that tombstone personalization might be ubiquitous but not uniform across the country; although I have nothing upon which to base that presumption.

River View Cemetery (Portland, OR)
In the set of photos accompanying this post, therefore, there is nothing that geo-locates a tombstone image of a Navy vessel, and to a certain extant the same is true of most of the other commercial craft depicted on local memorial, although there are a few boats pictured which could come from few other places. They aren’t exclusive to the Oregon Territory, but they’re otherwise uncommon and restricted to specialized areas.

Offhand, I’d guess that commercial cargo ships and tankers, while theoretically drawing their work force from the entire country just as the Navy does, in reality share a degree of crossover with the fishing community. There is to an extent an oceanside community that enjoys connections among itself separate from the world a few miles inland, and members of which transfer from one type of vessel to another as opportunity arises. Or, perhaps, as prudence demands. That and the on again/off again, nature of the shipping business — one tends to work several months or years straight and then take several months off — means that it’s easier to maintain seaside employment if one lives close to the sea to begin with; and consequently one is more likely to find engravings of commercial craft in seaside communities than inland. Axiomatic, one might say. 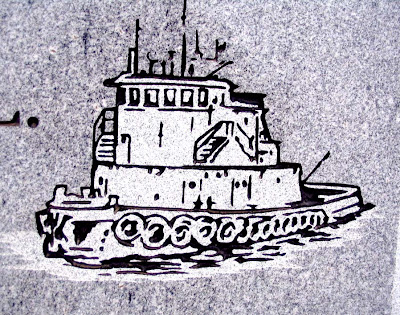 Woodbine/Green Mountain Cemetery (Rainier, OR)
Of the pictured vessels, several are of interest and a couple are very place-specific. Woodbine cemetery, where the image of the tugboat is found, perches above the Columbia River at Rainier, OR, halfway between Portland and the coast, a highly likely place for a tugboat captain to live. Tugs ply both the Columbia River and the open ocean, dragging barges around the world; though I imagine that different vessels, not to mention crews, do different tasks, and it’s not a matter of one tug fits all. Unlike fishing boats, the miscellaneous cargo ships depicted on tombstones are probably not the ship owners proud portraits, as the stones are generally more modest than large ship owners might desire, and more likely represent career vessels. It’s hard to tell just looking at a stone. 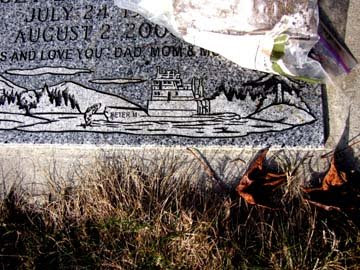 Wind River Memorial Cemetery (Carson, WA)
The log tender from a headstone at the small river town of Carson, WA, though, is indubitably a place-specific working boat, evident from the scene shown along with the craft. The body of water is neither ocean nor river nor even a lake (note the leaping fish) but rather a mill pond where logs are stored until processed. Almost miniature little tugs push and pull logs and rafts around these pond, or at least did so in times past, when life was flusher; and that’s what’s memorialized on the stone. 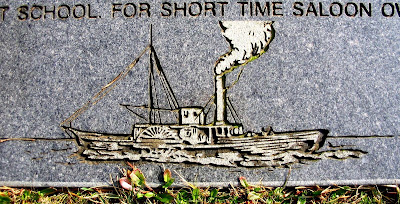 Iman Cemetery (Stevenson, WA)
But it’s the image of the small steamer “Wasco,” in the tiny, eponymous Iman Cemetery on the edge of the river hamlet of Stevenson, WA, that is not only place-specific, but historic, as well. The Wasco was built by one Felix Iman (the eponym) in 1854 and was the third steamer to run between Cascade Locks and The Dalles on the Columbia River. I suggest that non-natives search Google Images for the “Cascades of the Columbia” and “Cascade Locks” to get an idea of what kind of country we’re talking about. The Columbia slices a gorge straight through a snowcapped mountain range here, the Cascades, beginning at The Dalles and ending at the outskirts of Portland. Cascade Locks is in the middle. It’s a world-class chunk of geography.

The first wagon train of immigrants came through the gorge in 1843, making the Wasco an early economic venture for the white population. Iman quickly sold the Wasco and went into the saloon business, from which he immediately exited, as well. Both Felix and his wife, Margaret Windsor Iman have modern markers with brief histories etched into the stones. Hers is particularly dramatic:

That was not the half of it. (Notes on her life from an oral transcript of, perhaps, c. 1915 are available on line.)

The Indian attack which she mentions was part of a general uprising in 1856 as a result of a broken treaty on the part of the whites (I know you may find that hard to believe). During the fray the Wasco came under fire from Indians collected where White Salmon is now, across the river from Hood River; but the river is sizable and their balls had no effect

Earlier this month (on the 11th to be exact) I wrote a bit about the Palmer/Bell grave site, on the Washington State side of the Bridge of the Gods (modest name, no?) Norman Palmer, who is buried there with his sister, perished in the same uprising.

Eventually, the Indians were subdued and nine of them hanged, including one who was, according to Mrs. Iman, definitely not guilty; but revenge is often not meted out to the perpetrators of a crime, nor is it necessary. Any Indian will/would do. Mrs. Iman wrote of the hanging that they were “hanged on a tree about one mile from where we lived. Some of them, when asked to talk, shook their heads and put the noose around their own necks. Others laughed at those who were hanging.”

In any event, with the Wasco pulling barges of troops from Portland, the whites won and the steamer subsequently returned to her trade, albeit for only a short period of time. By 1857 she was pretty much out of business on the river. A later newspaper advertisement, from probably the 1860s, offered passage between Bellingham, WA, and Seattle on the “fast and commodious” steamer Wasco for $1; although I can’t be sure it’s the same steamer Wasco. Good price, though.

Lift that barge,
Tote that bale;
Get a little drunk,
And land in jail.