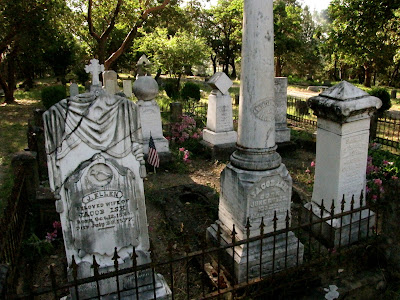 Jacksonville Cemetery
When I began visiting graveyards, I would worry about which way the headstones faced. Did they face over the grave, or away? It was important because I was concerned about walking on the graves as a matter of respect. Was it respectful to march all over someones grave? Enough visitations and it became a practical matter to not worry, because how else was one going to read a headstone without standing in front of it; and if that meant standing on a grave, then so be it.

A more important consideration turned out to be the feelings of the residents. As far as they were concerned, they were happy anyone came by at all. Eternity, after all, is a long, long time; and a visitor now and again is the most one can hope for. Family’s nice, but anybody’s better than nobody.

So, that’s a role I play: ol’ better-than-nobody. 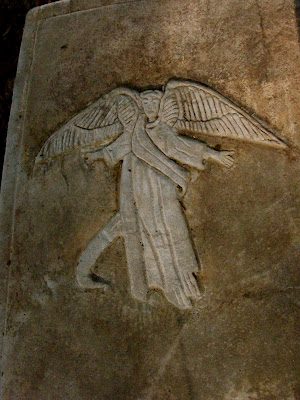 Jacksonville Cemetery
It takes time to get comfortable in a graveyard. Scarlett, the female protagonist in Neil Gaiman’s, inspired fantasy, The Graveyard Book, states the graveyard case succinctly: “I want to sit here and think.” She exclaims how Mr. Frost (another character) “thinks they can be the most peaceful places in the world.” Gaiman credits his son Michael for inspiring the book, when as a two year old he would “ride his little tricycle between gravestones in the summer, and I [Gaiman] had a book in my head.” Which he then took “twenty-something years to write.”

It was worth the simmering because the result is a small gem of a novel aimed at the early-teen years, but worth a delve at any age. It’s an English cemetery and the cast of characters is decently British (and earlier), but they’d be recognizable, accents apart, in any cemetery. Different sorts inhabit different parts of the graveyard, the paupers and witches, for example, holding court in their own unkempt corner, and each holds to the language, manner, and knowledge of its time. And as their store of information is only added to by the addition of new residents, their knowledge of the world is ancient, if incomplete.

The nuances of a good graveyard are well tended to. Consider this paragraph:

One grave in every graveyard belongs to the ghouls. Wander any graveyard long enough and you will find it—waterstained and bulging, with cracked or broken stone, scraggly grass or rank weeds about it, and a feeling, when you reach it, of abandonment. It may be colder than the other gravestones, too, and the name on the stone is all too often impossible to read. If there is a statue on the grave it will be headless or so scabbed with fungus and lichens as to look like a fungus itself. If one grave in a graveyard looks like a target for petty vandals, that is the ghoul-gate. If the grave makes you want to be somewhere else, that is the ghoul-gate.

The essence of the tale, a murder-mystery, if I can spill that much without letting the baby slip away, is of a child brought up by the denizens of an English graveyard. Gaiman displays a sure hand in keeping the story moving swiftly and engrossingly along, with each sentence riding to its destination with comfortable assurance. He credits Kipling as an influence, which is never a bad place to start, but I also detect notes of Tolkein in there as well, echoing the complex English love affair with language. The words are simply fun to read. Aloud would be even better.

The damps, drafts, and underplaces of a large and overgrown cemetery are lovingly sketched in this quick read of slightly over 300 pages. Characters are often introduced with their names followed, in parentheses, by their birth and death dates and epitaphs. It’s that attention to small detail and the ambiance of a cemetery which speaks to the years spent absorbing them. Gaiman has done his homework well, and the tale unfolds effortlessly. If a few details are glossed over, well, it’s a novel, after all.

A previous Gaiman novel, Coraline, was recently turned into an animated, 3D movie by a local shoe salesman here in Portland, although I assure you I have no connection with either. But I wouldn’t be surprised if this made it to the big screen, too. I’d go watch it.

[My copy of The Graveyard Book was published in 2008 by Harper-Collins and weighs in at 312 pp.] 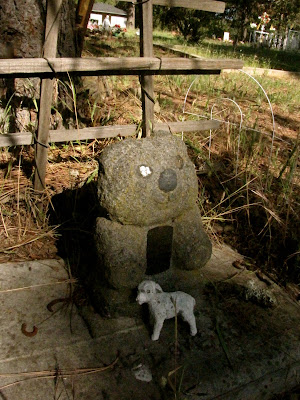 I have a resized banner but for some reason I can't paste it here in the box. My email is dallmann8r@yahoo.com ...Send me an email so I can send you the resized banner...this one is a little too big...

And excellent post...I always wonder if I should step on graves or not myself...

Ah Johan my Man! I too am a huge fan of Neil Gaiman. Can I dare hope that you read Terry Pratchett as well?

I have been considering getting that book and you just tipped the scales for me!Love your new banner too!

I always love what you have to say! I, too, loved the book, perfect read on a lazy day.

I've been busy and will get to the new banner soon. Glad it's liked. I like it too.

Don't know Terry Prachett. He or she? What did they write? I obviously should know.

Neil Gaiman and Terry Pratchett wrote a book together called "Good Omens". You have got to read it. You'll be hooked on Pratchett after that.