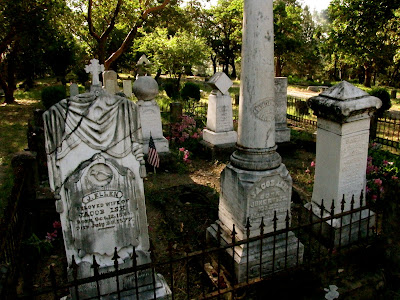 Jacksonville Cemetery
Despite the fact that some regional Indians lived in settled villages and had done so for millennia, all current Oregon towns date from the pioneer period of our history when we were invaded by waves of Americans, Europeans, and Asians. This was a relatively short period of time, roughly from, say, 1840-1890. The towns that were prominent in that era are not necessarily the same that are of importance today. This, of course, could change again in the future, though I suspect Portland’s preeminence will continue for the foreseeable future.

Our first “official” town was Astoria, named for John Jacob Astor, the fur baron; whereas The Dalles is located at the site of a forever trading rendezvous location at the high desert entrance to the Columbia River Gorge. The Dalles will rise again, simply because of its location. Google, for example, has recently moved a plant there. Jacksonville Cemetery
During the early years, the major community in southern Oregon was Jacksonville. Once eclipsed, Jacksonville fell into a Rip Van Winkle slumber where nothing changed for a hundred years only to reawaken a couple decades ago to discover itself a stunningly preserved gem on the edge of a burgeoning agricultural/arts-cultural valley. The cemetery is a high point, literally and figuratively, for the town. It’s one of the reasons to go there. They know it and they display it prominently.

What follows is the introduction to the Jacksonville Cemetery set on Flickr, which includes some 120 photos. They’ve added a lot to the cemetery since I first visited, some 35 years or so ago; and the place is still in active use.

There’s one photo in this post from Keno, a Rock Hudson-Doris Day kind of spot on the Klamath River. It has just been announced that six damns on the Klamath will be removed to restore salmon runs to the upper Klamath Basin. 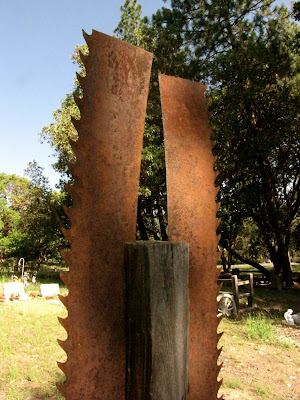 Jacksonville Cemetery
There are, I would contend, three iconic, non-Native American cemeteries in the state of Oregon: Lone Fir (Portland), Camp Polk (Sisters), and Jacksonville. There are numerous other delightful, rustic graveyards scattered throughout the state—we are blessed—many of which excel in one manner or another, but those three are unmatched for size and variety of monuments. These three say “Oregon” loud and clear. Not big. Not showy. Not elaborate. Just ours, thank you, ours. A little off-center. A little left foot. The box has yet to show up that we’re suppose to think outside of. We don’t march to our own drummer. We have no drum. 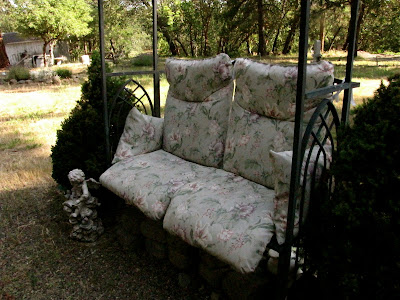 Jacksonville Cemetery
But enough about me.

Jacksonville goes out of its way to get you to visit their cemetery, beginning with a spiffy, black and white sign out on the main drag, and a wrought iron entrance arch visible from the drag, as well. Their cemetery is the town’s crown jewell, and other than the Britt Festival, it’s arguably the best reason to visit this preserved town. Certainly, the community thinks highly of it and a stroll around the grounds offers ample testimony to their involvement, not the least of which being an “interpretive center” established there in 1991, amplified by several other interpretive signs located throughout the cemetery. There’s a lot of story here to tell and a lot of it is told through the cemetery. Its unusual size and complexity for what became a forgotten by-place, alert one right off the bat that this community had its greater glory days. Notably, the cemetery is an amalgam of six separate cemeteries: city; Catholic; Masonic; Odd Fellows; and Red Men, both Improved and Independent Orders; and Jewish. Combining cemeteries is common, but to have so many sections for such a tiny town attests to its erstwhile luster. The Masons and Odd Fellows and Catholics sprinkled cemeteries all through the state; their appearance here along with a municipal plot would attest to a certain stature Jacksonville had in the past; while the rare appearance of the Orders of Red Men boosts that claim considerably; but the clincher is the Jewish section. You don’t find Jewish cemeteries unless there’s money. I’m sorry if saying that offends anyone and I don’t mean it in a crass or derogatory way; I’m only pointing out that Jews only show up where there is significant commerce, and the existence of a Jewish cemetery is a guarantee that, at one time at least, wherever place you’re at once had clout. Albany, Oregon, once had clout. So did Jacksonville. (Portland has seven Jewish cemeteries; Portland still has clout.)

But the Jacksonville Cemetery, it’s important to note, is not a cemetery frozen in time as, say, is that of Myrtle Creek; and while the proliferation of relatively old stones (for the West Coast) is the advertised draw here, in my mind it’s largely the active new stuff that merits attention. Admittedly, this place doesn’t have quite the exuberant insouciance of Camp Polk, but it’s a close second; and don’t come here without expecting to spend a lot of time. I advise sandwiches, something to drink. The six sections must cover at least fifteen acres crawling up a madrone covered ridge. The newer stuff tends to be lower on the hill, but not necessarily. The Jewish section has considerably more activity than either than fraternal orders or the Catholics. 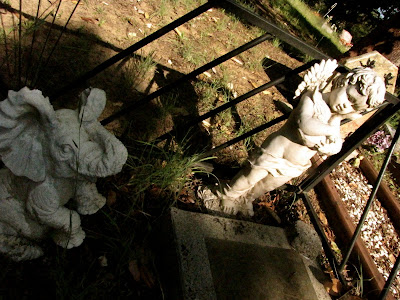 Jacksonville Cemetery
The 1972 movie The Great Northfield Minnesota Raid, which stared, among others, Robert Duvall as Jessie James, was filmed in Jacksonville, thanks to its period architecture. I must say that the mountains of Northfield never looked better. Or bigger.

For some inexplicable reason, the USGS, and hence ePodunk, don’t list this cemetery. They do list a Jacksonville Cemetery in Jackson County, but it’s considerably north of here and I haven’t tracked it down yet.

There are a lot of reasons to detour to Jacksonville, should you ever find yourself drifting up this way, even were there no cemetery; but this is a must-see. You’re gonna love it. 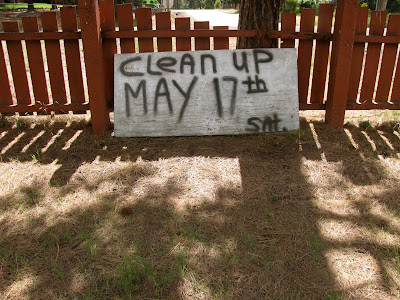