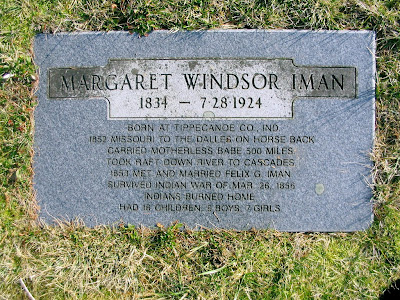 Margaret Iman’s (1834-1924) story is writ in stone is a small, eponymous cemetery on the backside of Stevenson, a river town on the Washington side of the Columbia as she rips a gorge through the Cascades:

Her husband, Felix Iman’s (1828-1902), slab is next to hers. Together they sketch a compelling pioneer story.1

Aside from a minor error, it hints at the enormous effort the Iman’s put into wresting a home from the forest. Frank, it happens, “was born 24 November 1828 in Monroe, Illinois,” according to “Iman Family Notes: ‘Margaret’ (A Windsor Perspective).”2 It wasn’t Frank who came from DeKalb Co., but rather Margaret, who left for Oregon from there.

It wasn’t an easy departure. Margaret, it turns out, was a runaway. She was born a Windsor, whose mother died when she was about ten years old and was subsequently raised by an archetypically cruel stepmother. By the time she was seventeen, her family was living in DeKalb Co., and by the time she was seventeen she’d decided she’d had it and ran away from home, joining a wagon train headed for Oregon. Her father went after her, dragged her back, and lost her again when he went looking for a river crossing. The second time he let her go. She was subsequently lost to the Windsor family until a descendant in Kansas put an add in the Ladies Home Companion in the 1920s asking if anyone knew what happened to her? One of Margaret’s children, Louis, chanced upon the magazine in a Vancouver, WA barber shop and his wife contacted the folks in Kansas.

The Indian War mentioned on her tombstone actually lasted longer than March 26, although not much. It’s frequently called the Cascade or Fort Rains Massacre and was part of a general Indian war of resistance to the white invaders known as the Cayuse War, of which, probably, the most famous incident was the euphonious Battle Of Seattle. The Imans played a not insignificant role in the events, and their interpretation of what happened differs considerably from the official record. According to James Windsor,3 who refers to the incident as the Yakima attack, the wrong Indians were punished. Sheridan claims4 that the Yakimas forced or coerced the local Cascade Indians into joining the attack, but the Iman’s claim otherwise. Sheridan left us a list of the settlers and soldiers killed in the uprising:

Sheridan doesn’t supply us with a list of Indians hanged, but a loose sheet of paper in the Oregon Historical Society’s files offers these names: “Chief Chenoweth, Capt. Jo, Tecomcoc or Tecomeoc, Tsy, Sim-sasselas or Sim-Lasselas, Tumalth or Tunwalth (other spellings), Old Skien, Kenwake (sentenced but reprieved on scaffold), and 4 Finger Johnny.”6 In Margaret Iman’s oral memoirs she describes the hanging of the Indians: She recalled they were “hanged on a tree about one mile from where we lived. Some of them, when asked to talk, shook their heads and put the noose around their own necks. Others laughed at those who were hanging.”7

Felix Iman’s schooner, Wasco, also particpated in the repulse. Assigned the task of hauling troops from Portland to The Dalles, the Wasco came under fire from Indians collected where White Salmon is now, across the river from Hood River; but the river is sizable and their balls had no effect. The third steamer to ply the waters between Cascade Locks and The Dalles, she subsequently returned to her trade, albeit for a short period of time. By 1857 she was out of business on the river. A newspaper advertisement from, probably, the 1860s offered passage between Bellingham, WA and Seattle on the “fast and commodious” steamer Wasco for $1; although I can’t be sure it’s the same steamer Wasco.

We can’t reasonably expect Sheridan, who was responsible for the protection of the whites along the river, to admit to hanging the wrong people. Nonetheless, this long quote from James Windsor describes the Iman experience:

Windsor points to this quote to help clarify the situation [of the Indian attack of March 26, 1856]: “I read the settlers in Skamania Co. at the Cascades had been expecting an indian attack for some time. Some of the friendly local indians had been warning the settlers that unfriendly tribes were planning an imminent attack, and for this reason Felix decided to build a new house closer to the river in case the family had to escape by boat. The original Iman house had been farther back from the river by about a mile. Of course no one knew when the attack would come and all were suprised by it. The local indians who were hung had been on friendly terms to the white locals. Indian Jim was one of the ones hung, and he was a good friend of Felix. They were of the Cascade tribe. The motive behind the hangings was anger and racism. Quite a few of the white settlers had lost relatives besides homes in the attack and there was some kind of revenge wanted, and as the Yakimas had all returned back to their land, the Cascades were the only Indians to take revenge one, even though they were innocent. Of course most white people at that time did not like Indians and did not trust them, so of course most of the locals were none too squeamish to get rid of them. Margaret claimed she witnessed the hanging, or at least at some point she claimed to have seen them hanging. Felix was away at the time and when he returned a day or two later he was sorry to hear about the hangings and told the locals that those Indians were all innocent and it was wrong to hang them. At least that is how history has left the story for us. There were also some sordid details a few days after the Yakima attack. There was a friendly indian and his wife and children and they were travelling by boat on the Columbia River near Shepherd's Point. It is said that Samuel Hamilton with some other local men, but not Felix, captured these Indians and their children and raped the woman and then killed them all, children included, in a very cruel way, by strangling them and chopping off their heads. Lt. Philip Sheridan (he later to be famous in the Civil War) was there serving as the commander of the force that had chased off the Yakimas, and Sheridan claimed it was Hamilton and some others whom he named go after the two indians who were then found murdered shortly thereafter. But of course this was hushed up and Sheridan declined to press charges and consequently never spoken of again, so no one prosecuted Hamilton and the others, but it is a sordid story and a sad comment on the history of the area.”8

The sorry story in my research of similar graveyard histories is that it is always the same: the perpetrators rarely see punishment which instead is meted out to the handiest person. Blame is always collective. 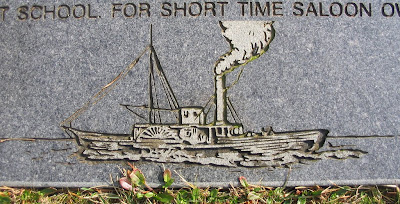 1 I’ve covered most of this story in previous blogs, so it may seem familiar. To an extent, I’ve plagiarized myself. The new material primarily concerns the “massacre.”
2 James Windsor, Draft, Iman Family Notes (with footnotes and editing by Steve Iman)[http://www.imanfamily.net/skamania/windsor.html].
3 Ibid.
4 Mea culpa for not having noted the references for this information. A case of casually reading through the Net for other information, reading this, and filing it away in my memory bank only to not be able to find the source when I went looking again. You’d think I’d learn.
5 Philip Sheridan as recorded in History of the Pacific Northwest: Oregon and Washington.
6 OHS 929.379272; R 179 cem. Ramsey, D. G., Skamania Co. WA Burial Lists.7 Another lost reference. I searched and searched but have yet to refind this memoir online, but I know it’s there. Trust me.
8 James Windsor; Op Cit.
Posted by Unknown at 3:54 PM

Great stuff DMW. I like my history sketched on a bit of granite.