Sometimes this is a delicate job, this recording of cemeteries. For the most part, aside from certain categories where I try to religiously cover as much as I can find, the monuments and markers I choose to photograph and post as representative of any given cemetery are arbitrarily chosen by my own internal aesthetics and interests. I figure that, if nothing else, my biases will probably be consistent and therefore can be taken into account by independent observers.

I photographed the Marcola cemetery in early April of this year (2012).

Oregon doesn’t have an Appalachia, white folk haven’t been here that long. It does, though, like everywhere else, have its pockets where God avoids showing up on weekends and doesn’t drive down an unknown driveway. I had a whilom friend—I think he’s no longer whiloming with us—who, while living out Marcola way, got into a short gun battle with the sheriff. He fought the law, and the law won. It was on a roadside to Marcola where Diane Downs shot her three children in the backseat of her car. Marcola, perhaps, doesn’t aspire to greatness; it’s more likely to settle for a meth lab. It’s buffered from Eugene, the capital of the county (Lane is too big a county to suffer a mere county seat) by a line of Cascade foothills. You cannot hear the highway from Marcola and you can’t hear the cheers from Autzen Stadium where the Oregon Ducks play football. What happens in Marcola doesn’t want to get out of Marcola. It stays put and lets the endless firs soak up the sounds.

Brownsville is a small, preserved town near Marcola. The movie Stand By Me was filmed in and around Brownsville. It’s a picturesque and somewhat chic town. I used to help an organic farmer there get his crops of baby vegetables and flowers air-freighted to New York, Miami, and Chicago. It’s at the runout of those buffering hills.

At 3 p.m. on October 23 of last year, thirty-one year old Josh Shaddon stabbed his mother, forty-eight year old Gerlene Thorne, to death in the home they shared in Brownville. He was arrested shortly thereafter on his way out of town with three young boys, ages two to six, in a Chevy Tahoe. Two of the boys were his children and the other a nephew. 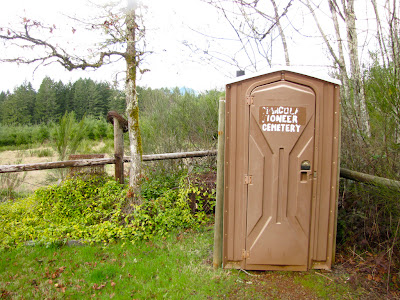 Shaddon was found guilty except for insanity and was sent to the state hospital in Salem for indefinite sequestration. Ann Webb (aka Ann Alto), who unearthed this information in the first place, posted this report from Democratherald.com (Dec. 21, 2011).

“Mike Thorne wrote that every morning he says good morning to his wife and he tells her he loves her.

“‘What he did to his mother is unbelievable. He viciously took her life. I hope he realizes what he’s done,’ the letter said.

“Two of Gerlene Thorne’s sisters, Kathy Rocha and Helen Wilkins, wrote they were not sure Shaddon was insane at the time of the killing. They hope he gets the mental health help his mother tried so hard to obtain for him.

“‘We love you because you are her son, but we hate you for what you did,’ they wrote.

“Karen Johnson Zorn, one of Shaddon’s defense attorneys, told the court her client understands the family’s anger. She said it has been hard for Shaddon to accept his mother’s death. He can’t believe he killed her.”

I can understand the urge to kill. I have been up against that wall. More than once. The reasons I didn’t are as many as the reasons I had for wanting to. I do know, however, that being up against the edge of that wall is very, very short from being pushed over it, and that, once you’re falling what happens next is beyond your control.

Something went terribly wrong that fall day. Terribly, terribly wrong. The pain and anger from the family’s letters is palpable. The agonizing pull between “we love you…,” and “but….”

Gerlene’s stone was among those I photographed in the Marcola Cemetery in April. It was unusually elaborate for this modest cemetery: a matté, full-relief angel holding a burnished granite heart in the center of which smiled a photo-ceramic of Mrs. Thorne. Her grave was neatly covered with bark-mulch and richly adorned with ceramic figurines, photovoltaic butterflies, whirligigs, faux fleurs, and American flags. It compelled me to take a couple pictures, which is how Ann came to take up the story. 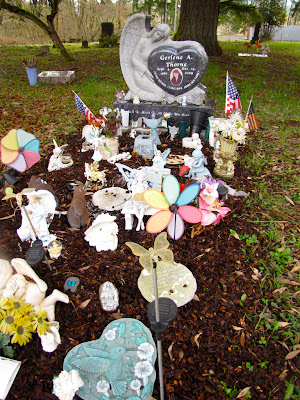 Then a Flickr mail from sadlydeparted. sadlydeparted, evidently, joined Flickr solely to comment on Gerlene’s photos. She/he just joined, has no profile, and has posted no photos. It’s not unusual for people to join Flickr simply to comment on a relative or friend’s tombstone. The note is reproduced in its entirety, as is. In offering it to you, I had two choices: one was to give you the backstory, as I have; but the other was to give you the letter unadorned as a short story in itself. I chose my way, but when you read it, read as a complete story. It needs no elaboration. 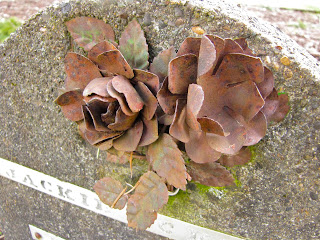 Such a sad story and well presented.

Such a tragic story. Such a beautiful memorial.