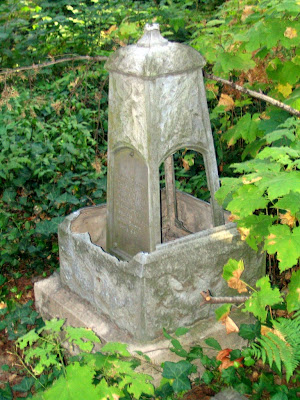 Jonathan asked: “Have you ever done anything on graveyard vandalism? Forgive me if you have and I missed it. I know you like the uprights, but they invite wackoes to knock them over.”

No, Jonathan, I haven’t; and I’ve been pondering that ever since you asked: “What could I say about vandalism”? Other than it’s fucking stupid?

For the purposes of the blog or Flickr, I don’t record vandalism, other than occasionally. It tends to be a given in any cemetery to one degree or another. The most successful cemeteries on combatting vandalism are Jewish cemeteries (at least around here) which often have resident caretakers; the surest protection known. Larger, more expensive cemeteries have a degree of immunity, but are not entirely safe. Every cemetery is at risk. Small, unattended, rural cemeteries are ripe fodder for disenfranchised youth (vandals are most often young).

If the vandals are not young, I’d suggest that a more sinister motive is in play: bigotry. Certainly, bigotry can be a motive for the young, as well, but sheer indifference and mischief making are heavy factors, too. Tell the Jews about bigotry and cemetery destruction.

The practical question is how to combat it. Punishment is probably ineffective and pointless and, at best, after the fact. If one is always paying for the pound of cure, one never gets to the ounce of prevention. There are many practical steps one can take to make one’s cemetery less inviting to vandals, such as trimming up the bushes and keeping lines of sight open, which are undoubtedly good advice. In general, the better the maintenance, the less vandalism. Vandals are less likely to target places they think are under observation.

For rural and pioneer cemeteries, your best bet is to make the communities “own” the cemeteries; and by “own,” I don’t mean “have physical title to,” I mean “own” in the sense of “having, with pride, accepted responsibility for.” Involve the community in making the cemetery a place of community, not just a repository for dead people. Get the community to care about the cemetery. Have classes and school clubs take up maintenance. Do things in the cemetery. Have art shows, plays, concerts. Hire local graffiti artists to do art/promotions. Bring your history to the cemetery. Do whatever you can to involve the neighbors in believing they have both a treasure and a sacred place on their hands.  You’re never going to win it all, but you can make a big dent.

The tougher problem is altering one’s views on the origins of vandalism, in the first place. Or, for that matter, the origins of social deviance and what to do about it. One’s views determine one’s response.

Revenge, as a punishment component, has the unfortunate effect of multiplying itself. Revenge turns to revenge and cycles are set in motion that are almost impossible to eradicate, witness Turkey-Greece, Israel-Arab, Sicily, Hatfield-McCoy, and on. Old scores die hard. The only way to stop revenge is to stop it. There’s no compromise out of it. It simply has to be stopped. Revenge is counterproductive.

With that out of the way, we can concentrate on punishment as behavioral modification, as deterrent, as reprogramming.

But, perhaps, it’s better to begin by asking, not how effective punishment is, but what do we know about behavioral modification and how can it most effectively be achieved? If we were serious about reprogramming criminals, we’d be a lot further along than we are. The most that can be said for our behavioral modification program is that it relies almost exclusively on fear (of further punishment which could well extend into the afterlife, if you believe the believers); but it’s long been known that positive reinforcement is much more effective than negative. Punishment that doesn’t include community building and the integration of the transgressor into society is pointless, useless, and expensive. It does, though, provide for a lot of jobs.

Just offhand, I’d put all cemetery vandals on cemetery maintenance patrol. I’d have a few classes on what cemeteries mean to people, what they do for society. Maybe I’d have the vandals assist with a few funerals. Maybe involve the vandals with putting on a community art show in the cemetery. You get the idea.

Just keep it in mind that nothing solves everything. Be realistic.

Thanks for the follow up, Johan. Yes, a lot of cemetery vandalism is by the alienated young, has been for decades. I wrote a paper to one of the local papers years ago pointing out the potential loss of heritage when a bunch of stones at a pioneer cemetery were toppled. Such events would be less likely in a more cohesive place such as Japan (though the markers there tend to be smaller inscribed slabs for "cremains"). Yes, cemetery vandals indicate wider problems than just the impact to dark graveyards with little or no security.