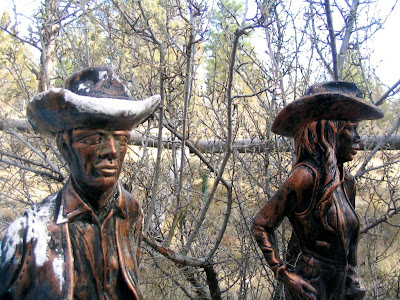 It’s on an island surrounded by a grass covered wildlife sanctuary carved from an old lake bed, pancake flat (the sanctuary, not the cemetery) deep in the ponderosa country leading to the Cascades. A few short years ago it was virtually lost to the wilderness, but now it’s being surrounded by suburbia, even though there’s no city near by. The houses being built on the periphery of the sanctuary are anything but cabins. The sanctuary, though, provides ideal cover; a limited form of perpetual care, as it were. Nothing will ever be built next door to the Camp Polk Cemetery. And, God willing, no one will ever straighten the place up. 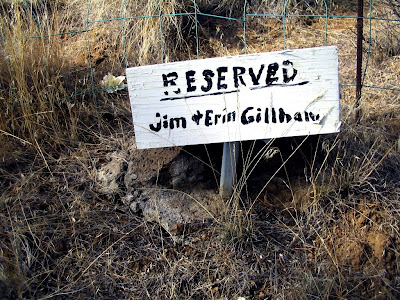 As it is, it is, as Kay comments, a “free-for-all.” There is absolutely no rhyme nor reason to any of the layout, with graves sprawling every which way and marked with all manner of hardscrabble brevity, personal fancification (like that word?), and homey care. No one does any general landscaping and plots are held by handmade signs attached to sticks, or whatever. How one acquires a plot is unexplained. There are, apparently, no rules. It’s the only cemetery I know dotted with fire pits encircled by crude benches, People come here to party. Perhaps “celebrate” would be a better word. There is no vandalism. There are no empties scattered about. There are not even great piles of detritus, as one tends to find in Native-American graveyards, which exhibit a similar strong sense of place. The cemetery is well maintained. It’s just chaotic. 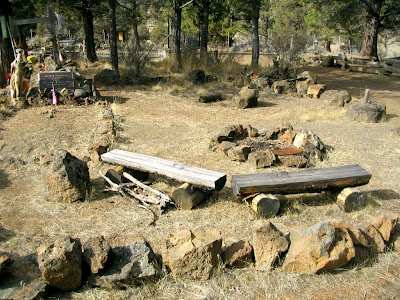 It is, without a shadow of a doubt, one of the great Oregon cemeteries. And if any cemetery screams “sense of place,” none does louder than Camp Polk. It’s a little-sung state treasure.

Camp Polk exemplifies all the cemetery forms of expression that convey a sense of place: monuments, personalizations, and epitaphs, but especially in its layout. Or lack thereof in this case. Cemeteries, like golf courses, tend to try to recreate a British landscape wherever they are. Following to one degree or another the dictates of the rural cemetery movement, which attempted to recreate English manor house grounds, cemeteries tend to be marked, wherever they are, by, at the very least, lush lawns. While it’s a goal often honored in the breech, it doesn’t mean that it’s not aspired to by most cemeteries; yet Camp Polk bends to no fancy foreign notion of what sacred ground should look like. At Camp Polk the sacred ground looks like all the other ground in the forest. Which is, perhaps, a way of saying that all ground is sacred, versus only a small, landscaped portion of it. By definition, a cemetery with a sense of place shares the landscape of its neighborhood. 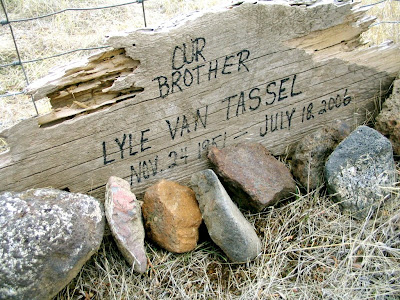 Camp Polk Cemetery is unique as a white person’s graveyard, in my experience, in its matching the Oregon Native American cemeteries for their laissez-faire attitude and decorative sense, but, as I’ve already pointed out, there are significant differences. A subtle one is emblematic: the constant theme in Native American cemeteries here, besides horses, is the eagle. They’re everywhere in Indian cemeteries. In Camp Polk it’s coyotes. The place is infested with them. Artificial, of course (though I’ve seen coyotes in cemeteries more than once). What this means, I’ll leave for others to decide; I only report the news. 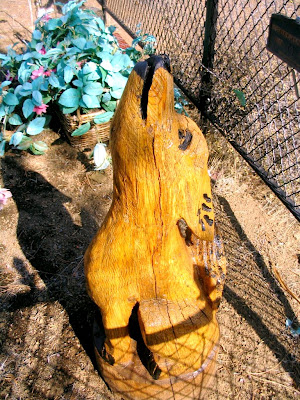 Camp Polk Cemetery is not only surrounded by development oozing out from Bend, a Central Oregon “hot spot,” but it’s developed a cachet of its own, one that it’s not always had. It was lonelier, when we first found it. It’s still a free-for-all, but suddenly there’s a lot more activity. While it may once have been in danger of disappearing into the wilderness, it’s now in danger of one day being filled up. 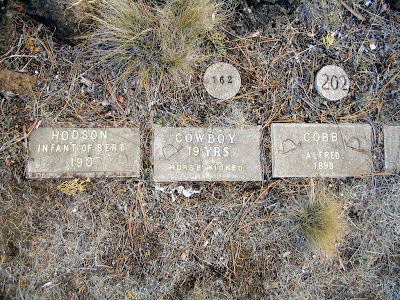 I’m not the only person in love with Camp Polk. Some time back, Kim Stafford, perceptive observer of Oregon life and director of the Northwest Writing Institute at Lewis and Clark College, made a project of locating several pioneer cemeteries in eastern Oregon, of which Camp Polk was one. He evoked his experience in an essay entitled “December Meditation at Camp Polk Cemetery” (Having Everything Right: Essays of Place [Sasquatch Books]) The following excerpt gives, not only a flavor of Camp Polk, but that of a cemetery dog, as well:

Religion in the desert has a lot to do with patience, and patience has a lot to do with silence. Beyond my feet where I lie at Camp Polk, there is a stone with an infant’s oval ceramic photograph fixed to the pedestal. Someone sometime has used it for target practice, and the gray paint of the bullet shies away low and to the left. There are so many children, and they are all so silent they are a chorus. The desert is big enough to hold that wind.

At Ashwood in that ten years back I heard a wind coming. All was still where I crouched, but I heard that wind. Hot. There was a permanence to every stone crumb and weed-stalk in the little enclosure of wire where I stood up. About a quarter mile away, a single tree was moving. The others were still. I folded my map and put it away. Then the little whirlwind moved down the hill into another tree and left the first tree alone. There was a weight to the afternoon. Then all the trees were still and the wind was a slender spiral of dust coming down toward me.

Even under the snow I can see the varieties of hope at Camp Polk: the ring of stone, the chain perimeter, the lichen-shredded picket fence, concrete moat, rusted cast-iron rail around a rich man’s plot. In the sweep of open desert ground, the grave’s plot is a pouch, a box, a small fenced span of certainty. That’s all. That’s enough. It’s nearly dark. 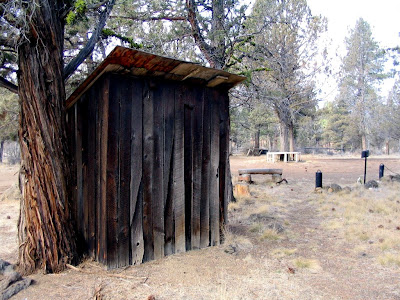 I have spotlighted you on The Educated Graveyard Rabbit. I hope you do not mind. I just adore your blog.
Sheri Fenley

Thanks, Sheri, for both the spotlight and the kind words.