Rainier Cemetery
A trio of Washington State cemeteries I recently visited on a trip to see Jimmy illustrates the principle of “random acts of beauty.” The three cemeteries—Rainier, Orting, and the Washington Soldiers Home—count among them two pioneer and one military cemetery, which range from almost military precision to largely free-for-all. 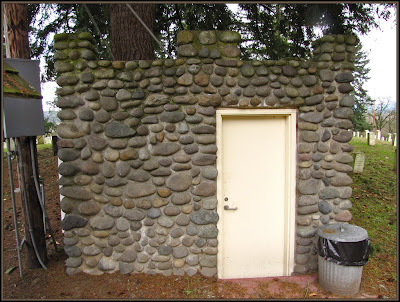 Washington Soldiers Home Cemetery
The Washington Soldiers Home Cemetery occupies the southern flanks of a small knoll, a good defensive position, that guards the neighboring valley. The graves are laid out in concentric rings surrounding an obelisk and flag pole, which occupy the summit. The nearly identical stones are only occasionally interrupted by irregulars the likes of which one finds in any graveyard. There is a dignity to the uniformity and tidy order of military cemeteries, and this is no exception. One would be honored to be buried here (and only pray for a bigger maintenance budget); knowing that, in the evening when the ghosts come out to chat, the line stretches from today to the Civil War. They may have differing accents and differing garb, but the stories will ring the same bell over and over again. 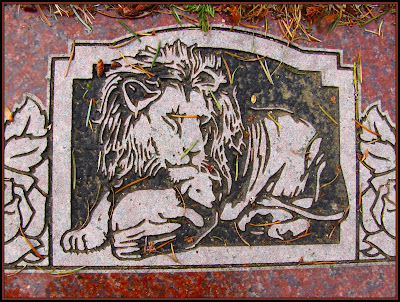 Orting Cemetery
Orting Cemetery is not far from Washington Soldiers Home—at the other end of a horseshoe bend—in either distance or sentiment. It, too, is orderly though by no means uniform; and while there are uprights here and there, I notice in the photos that all the recent stuff is flat, suggesting a modern regulation. A number of the flat markers, though they may be intermittent in age, are of the “pillow” variety, meaning that they rise above the ground surface and are a consequent impediment to mowing. A new sign at the entrance demonstrates that someone is minding the store. 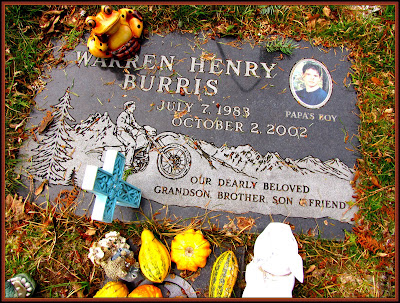 Orting Cemetery
Despite the lawn stone requirement, many of the headstones display individualized carvings, that while not detracting from the dignity of the interred, refrain from excess sobriety. Warren Burris’s stone, emblazoned with, not only his, “Papa’s Boy,” photo on the surface, but also a deep carving of Warren jumping a motorcycle in the mountains, is a good example of giving dignity to an untimely death, while leaving reminders of who the deceased was beyond a name and dates. A tombstone of this sort goes beyond reminding us that someone is gone but helps us remember who they were, even if we never knew them. It celebrates the person versus mourning them. 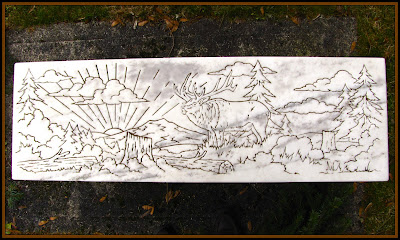 Orting Cemetery
In the same way, the bench honoring Ken Montgomery, while rife with the symbols of death—bellowing bull elk, fallen tree, setting sun—is anything but somber and depressing. It certainly has its own joie de vivre. 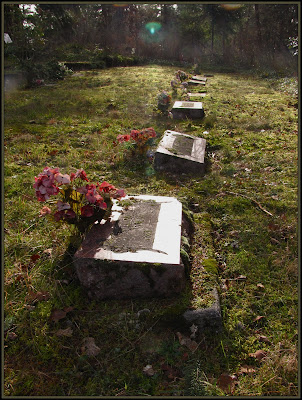 Rainier Cemetery
Overall, Orting displays a mid-point between the strict regulation of Washington Soldiers Home and the liaise faire rambunctiousness of Rainier Cemetery, an unquestionably delightful graveyard. It was walking up the sun-dappled slope of this small wooded cemetery (Rainier), after recording some 680 cemeteries, that the sentence grew in my mind: a good cemetery is a joyful place. 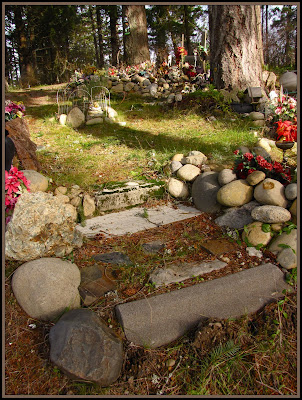 Rainier Cemetery
It was a sharply cold day when I visited and the wind was finding any smidgin of unprotected skin, but the sky was bright with a thin layer of gauze where a cloud might have been. Even at midday the sun streamed in low on the horizon, and oblong patches of light stretched away from it. The wind was knocking down a rain of small branches and here and there lay a widow-maker. It paid to stay alert. But the slope it was on, facing west and south, helped, perhaps, by a canopy of small to large trees, gave an illusion of warmth and protection. There was no sign at the entrance telling people what they could and could not do. No one cared how long your plastic flowers brightened a gravesite.

For the most part, despite the geography and presence of sizable trees, the graves in Rainier are arranged in an orderly fashion, although the order quickly disintegrates if the situation demands it. Corners of the cemetery, half forgotten, are being swallowed by bushes and St. John’s wort; and when one gets to the “rockery” at the top of the hill, all pretense at precision is put aside. Up there is a scene worthy of Camp Polk, with someone or some bodies having hauled in uncounted pickup loads of rocks and erected a considerable complex of nooks and crannies festooned with fields of plastic flowers and storms of driftwood. There are benches and fences, crosses and a wishing well (in case the one didn’t work). Where there aren’t rocks, there are pebbles. An organic flowing together of several graves uniting them in a friendly family. One can only imagine the scene at night when the ghosts here come out to sit on the benches and trade stories. 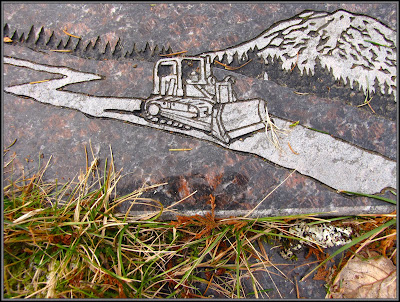 Orting Cemetery
Of course there’s more; you’ll have to come see it yourself.

But it’s a joyful place. It’s an inviting space. It’s a place that says: sit down a spell, have a bowl, relax. It’s just the way a good cemetery should be.

Think you could stay?

Rainier Cemetery
Posted by Unknown at 11:23 AM

Wow you certainly have an eye for photography. Great pics... Happy Holidays...

It is always a joy to read your posts and see your pictures.Thank you.I posted a close up of the Sheriffs headstone yesterday if you want to take a peek.He has a great view from up there!

I couldn't agree with Emmie more. Or less, I'm not sure.